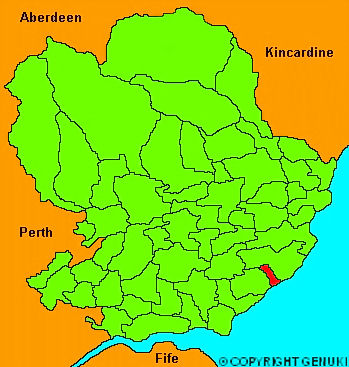 "Arbroath or Aberbrothock, a royal burgh in Forfarshire, situated at the estuary of the river Brothock. The parish of Arbroath or Aberbrothock, is of small extent, being an erection about two centuries ago, of the town and royalty into a separate parish from St Vigeans, in which it was formerly included. It lies in the direction of the Great North Road, about 17 miles East of Dundee. The body of the town consists of one street, nearly half a mile in length, running north and south from the sea, and another on the west side of smaller extent. Both these are intersected by cross streets, and are in general well built, though without much regularity. To the eastward of the town, and locally situated in the parish of St Vigeans, there are two neat regular streets; at the top of one of which is situated an elegant chapel of ease, built about three years ago. On the west side of the river Brothock there are also several neat streets newly built, consisting chiefly of small houses of one storey, forming a suburb of considerable size. The harbour is small but commodius, and can be taken by vessels in a storm, when they cannot enter any neighbouring ports. It is defended by a neat battery, mounting six 12-pounders, erected in 1783, on account of an attack made by a small privateer, commanded by one Captain Fall during the American War."

Edited from The Gazetteer of Scotland, W Chalmers, Dundee 1803

Monumental Inscriptions of the Abbey Churchyard of Abroath have been recorded in Pre-1855 Gravestone Inscriptions in Angus, vol 2 edited by Alison Mitchell, Scottish Genealogy Society, 1979, ISBN 0 901061 22 0. (Follow links to online shop, then memorial inscriptions, then Angus.) Burial records for the Abbey Churchyard Arboath are conatined initially in the Old Parish Records and afterwhich they are held at Angus Recreation Services, Dewar House, Hill Terrace, Abroath. Abroath Eastern and Western Cemeteries are both nineteenth century municipal cemeteries with burial records held at the same office above. Sydney Cramer recorded inscriptions in the Abbey Churchyard in the 1960s, copies held at Dundee Central Library and on microfilm by the LDS Church, microfilm number 0564331 item 1.

All census returns for the parish of  are held at New Register House, Edinburgh and can be consulted there. The census returns have been microfilmed by the LDS church and the films numbers are:

Old Parish Records for the parish of Abroath (272) are located in New Register House, Edinburgh. These have also been microfilmed by the LDS Church. The records contain:

Births and marriages have been indexed and the deaths will eventually be included in the National Burial Index.

All records of Civil Registration are held at New Register House, Edinburgh. Microfilm copies of births, deaths and marriages for the years 1855-1875, 1881 and 1891 have been filmed by the LDS church and can be ordered to any family history centre worldwide. Microfilm numbers for Births, Deaths and Marriages in Angus can be found on the Civil Registration page. It is necessary to know that parish number and this can be found on the list of Angus parishes. PLEASE CHECK FILM NUMBERS BEFORE ORDERING.

Details of Wills and Testaments can be found in Commissary Court Records. Persons from Arboath can be registered in the Commissary Courts of St Andrews, Brechin, Dunkeld or Edinburgh. Indexes to these records have been published by the Scottish Record Society until 1800.  Arbroath was in the Sheriffdom of Forfar and details of these records can be found on the Forfar Sheriff Court page. Records of the Commissary Courts and Sheriff Courts are held at the Scottish Record Office, Edinburgh.

You can see pictures of Arbroath which are provided by:

Population movement can often be very difficult to trace. There are a number of publications which can help trace individuals who may have emmigrated from the county of Angus such as Tay Valley People in North America, and Tay Valley People in Australia both published by Tay Valley Family History Society along with The Scots Overseas: emigrants and adventurers from Angus and Perth by David Dobson, 1996, St Andrews.

You can see the administrative areas in which Arbroath has been placed at times in the past. Select one to see a link to a map of that particular area.

General History is dealt with in the following books.

Arboath and its Abbey; or the early history of the town and abbey of Aberbrothock,
by David Miller, Edinburgh, 1860.

Additional information can also be found in the three Statistical Accounts.

The records of Arbroath Burgh are to be found at Angus Archives.