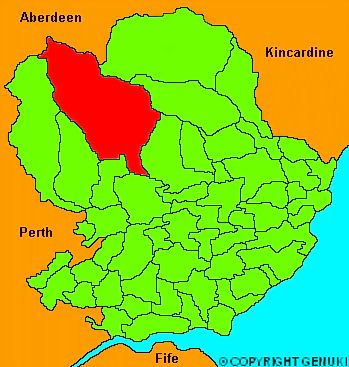 "These united parishes occupy a very extensive proportion of the county of Angus. The soil is generally poor, with a wet and cold bottom; a part however, of the haugh ground, on the banks of the Esk, the only river in the district, is a light early soil, interspersed with frequent patches of moss. The parishes include the great part of the Grampian mountains and from this circumstance are calculated principally for pasture; some of the hills are of great height, and many places are beautifully romantic and picturesque. In the small part of the parish which is capable of cultivation, the farmers follow a regular system of agriculture. Marl, which is procured in great plenty at the distance of 3 miles, is the only manure. There are two small lochs in the district, which aboud with trout and pike. The common fuel is peat, turf or heath, which are abundant in every part. Cortachy Castle, belonging to Lord Airly and Clova House, the property of the Hon Walter Ogilvy are the only seats. Whinstone is found in great quantity; but no freestone, or any valuable mineral, has yet been discovered."

You can see pictures of Cortachy and Clova which are provided by:

You can see the administrative areas in which Cortachy and Clova has been placed at times in the past. Select one to see a link to a map of that particular area.