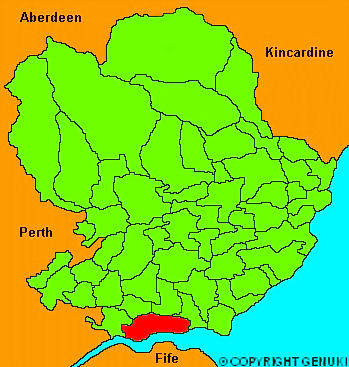 "A royal burgh in the county of Angus, seated on the North bank of the River Tay. It is a large and well built town, consisting of several streets, diverging in every direction from the market place or High Street, which is a spacious square 360 feet long by 100 feet broad. On the south side of this square stands the Town House, an elegant structure, with a handsome front, adorned with piazza's below, and overtopped with a neat spire 140 feet in height: this building which was completed in 1734, contains the Guild Hall, the Court Room, town-clerk's office, with vaulted repositories for the towns records and apartments for the Dundee Banking Company's office: the prison occupies the upper story, and does much to honour the feelings of the magistrates, under whose auspices it was erected, the rooms being well aired and commodius, and at the same time perfectly secure. At the east end of the square, the incorporated trades have erected an elegant Trades Hall, with a superb front of Ionic pillasters, and a neat copula: the lower flat is occupied by shops, and the upper flat contains rooms for each corporation, and a large hall for general meetings, which is now occupied as a subscription coffee-room, on the most liberal and extensive plan. Opposite to the Trades Hall, in the west end of the square, a neat Episcopal chapel has been lately built. At the south east corner of the square, about 100 yards from the Trades Hall, stood the Castle Hill, so called from the ancient castle. A small distance west from the great square, is the old church, in which were originally 4 places of worship, and when entire had been a very magnificent building, with a large square Gothic tower or steeple 150 feet high at the west end of the church. The parish of Dundee is extensive, being six miles from East to West along the banks of the Tay; its breadth varies from one to four. The soil is in general uneven, but many places are abundently fertile, and the appearance is beautiful, particularly the south slope towards the Tay. The law or hill of Dundee is situated on the north side of the town, rising in a conical shape to the height of 525 feet above the level of the Tay; on its summit are the distinct vestiges of a fortification. There are several quarries of sandstone, of very hard texture, containing many quartoze nodules imbedded in it; but the principle stone used in building is brought from the Kingoodie quarry, in the parish of Longforgan."

You can see pictures of Dundee which are provided by:

You can see the administrative areas in which Dundee has been placed at times in the past. Select one to see a link to a map of that particular area.