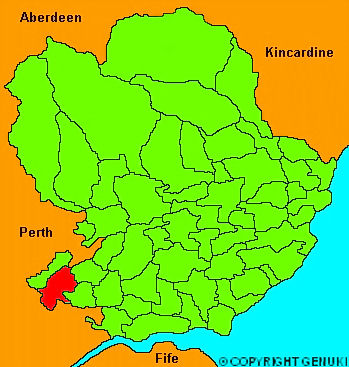 "About 4 miles in length, and 3 in breadth. It lies on the North side of the Sidlaw hills, and on a part of the valley of Strathmore. The greater part of the parish has a light thin soil, covered with heath and coarse grass; in many parts a rich clay soil prevails, which is tolerably fertile. There are 3 bleachfields, which annually lay down about 130,000 yards: there are seven villages, of which Kettins is the largest; it is pleasantly situated on a rivulet, which descends from the Sidlaw hills, and loses itself in the Isla, 5 miles below Cupar [Angus]; it lies on the turnpike road from Dundee to Cupar [Angus]; distant 12 miles East by North from Perth, and 14 North West from Dundee. Lintrose, formerly Todderance, the seat of Mungo Murray Esq, is a mile west from the village, and is envrioned with fertile fields and thriving planatations. Haliburton-house, formerly the residence of the family of Haliburton, is now the property of Lord Aboyne: in a detached part of the parish, 6 miles South West is the estate and house of Bandirran. There are two ancient castles; one at Dores, the other at Pitcur."

You can see pictures of Kettins which are provided by:

You can see the administrative areas in which Kettins has been placed at times in the past. Select one to see a link to a map of that particular area.