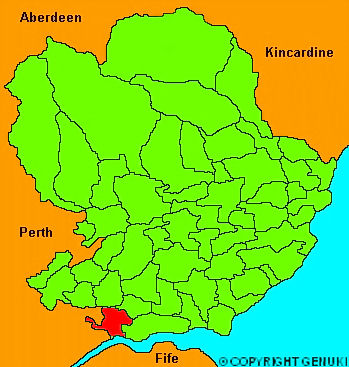 "The united parishes are about 3 miles in length and nearly the same in breadth. The surface rises with an easy ascent from the Tay, except towards the south west where it joins to the parish of Dundee. The higher ground forms a ridge, stretching obliquely in a direction from East to West, and behind is an extensive tract of muir, where there are some plantations, but no marks of cultivation. The muir is bounded by the water of Dichty, which rises in the parish of Lundie, and runs south and east through the valley of Strathmartin. There are several villages, viz, Locheye, Millhouse, Liff, Benvie and Invergowrie: the latter is noted as the site of the first christian church erected on the north side of the river Tay."