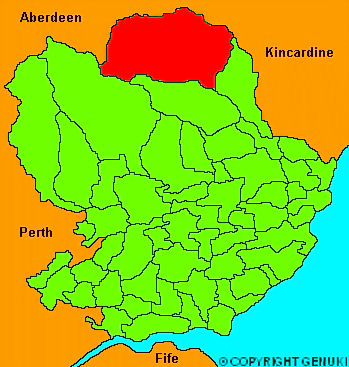 "A parish in Forfarshire, situated amongst the Grampian mountains, and surrounded by them all on all four sides, except towards the East. The inhabited part extends 8 miles in length, and 4 in breadth; but the pasture and waste lands make it 12 miles long, and 6 broad. The hills are for the most part steep, rocky and covered with heath, the cultivated land excepted, the extent of which is inconsiderable; and the soil is thin and light, generally on a bottom of gravel, intermixed with stones. ABout 9200 sheep, and 600 black cattle, are fed on the hills. The principle branches of the river North Esk, called the Lee, the Mark and the tarf, have their sources from lakes of the same name in this parish. The district formerly belonged to the family of Lindsay, who had their residence at Invermark, about a mile from the church, the walls of which only are standing. The whole parish is now the property of the Hon W Ramsay Maule of Panmure. The rocks abound with limestone, and a vein of lead ore has been traced for several miles, in a direction nearly from East to West; but it has not been found worth working."

You can see pictures of Lochlee which are provided by:

You can see the administrative areas in which Lochlee has been placed at times in the past. Select one to see a link to a map of that particular area.

Lochlee Parish in the 19th century