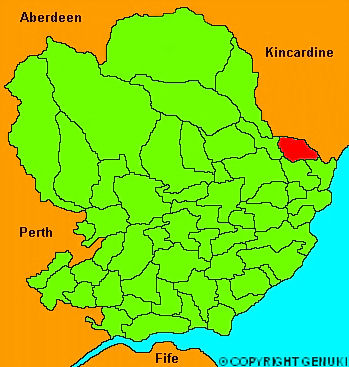 "A parish in Forfarshire, formed by the union of the parishes of Logie and Pert; is situated on the North Esk river, and is of oblong shape, 4 miles in length by 3 in breadth. The soil on the banks of the river, is a deep clay, yielding, though uncultivated, plenty of natural grass. The higher grounds are partly loam, and partly of a black muirish cast, on a cold till bottom. It contains 3860 acres, of which 1850 are cultivated, 770 under wood, and the remainder waste and uncultivated. There are two extensive bleachfields; one on the estate of Logie, and the other on Craigo. Here are several mansion houses; of which Inglismaldie, a seat of the Earl of Kintore, and Craigo, the seat of Mr Carnegie, are the principal. Near Inglismaldie, is an eminence called Rosehill, the property of the Earl of Northesk, from which that family takes the second title of Baron."

You can see pictures of Logie-Pert which are provided by:

You can see the administrative areas in which Logie-Pert has been placed at times in the past. Select one to see a link to a map of that particular area.