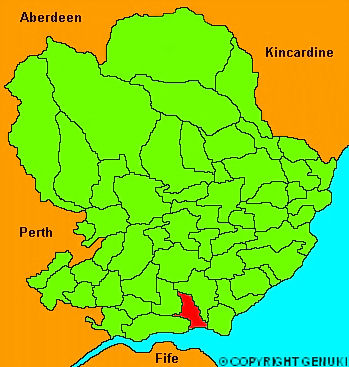 "Pleasantly situated on the Frith (sic) of Tay, near wher it extends into the German ocean. It is somewhat in the form of a wedge, six miles long, and three and a half miles broad at its South West extremity; containing nearly 3710 Scots acres, of which upwards of 400 are sandy downs, covered with bent, and formerly under water. The surface above these links is rugged; but, upon the whole, tolerably fertile, and almost certainly arable. It is watered by the river Dichty, and several of its tributary streams, which fall into the Frith of Tay, at the village of Monifieth. There are three villages viz, the East Ferry .... Monifieth and Drumsturdy Muir. Near the East Ferry, on a point of land projecting into the Tay, stands the castle of Broughty, formerly the key to the navigation of the river, but now in ruins. The principle manufacture is the weaving of coarse linen cloth for the Dundee market."

You can see pictures of Monifieth which are provided by:

You can see the administrative areas in which Monifieth has been placed at times in the past. Select one to see a link to a map of that particular area.

The Monifieth Local History Society is active in the town.