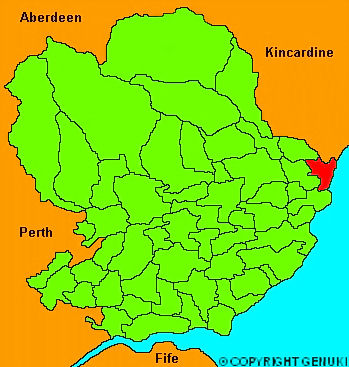 "A royal burgh and sea port .... seated on a peninsula, formed by the South Esk river, a large expanse of water, called the Bason, fromed by that river and the German ocean. It is neatly built, consisitng of a fine spacious main street, with by lanes, and is justly accounted one of the first provincial towns for its size in Scotland, or perhaps in Great Britain .... The principle buildings are, the Old Townhouse, situated in the middle of the principle street, lately repaired as a prison. The New Townhouse is a neat low building , with piazzas below, and rooms for public business above. The parish church is a large new building, very elegantly finished, measruing 98 feet long by 65 over walls. The Episcopal Chapel, situated in the links, to the eastward of the town, is a neat building, with a fine organ. The Lunatic Hospital, also situated in the links, is a plain and commodious building, built in 1799, not only for the reception of lunatics, but also for the reception of indigent sick, or as a dispensary for the relief of out-patients .... The Harbour of Montrose is very commodious, admitting vessels of large burden; and, in the river below the town, there is safe anchorage. There is a wet and dry dock, for building and repairing ships. .... The parish of Montrose is about three miles long and two and a half miles broad, lying betwixt the mouths of the rivers North and South Esks, over each of which rivers there is a handsome bridge."

You can see pictures of Montrose which are provided by:

You can see the administrative areas in which Montrose has been placed at times in the past. Select one to see a link to a map of that particular area.