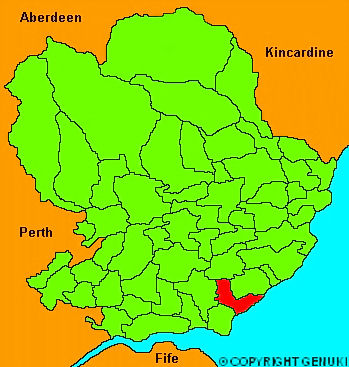 "Situated on the east coast, at the mouth of the Frith (sic) of Tay. It is about five and a half miles long, and two broad: the general appearance is flat, with a considerable declevity from the North to the Sea; the coast is flat and rocky, but has two open harbours at the East and West Havens, where small vessels may deliver their cargoes during the summer months. The soil varies considerably , being sandy on the coast, loam or clay in the middle, and muiry in its northern extremity. The parish is watered by a considerable stream, which runs at the bottom of a valley called Battie's Den, over which is thrown a high bridge, on the turnpike road from Dundee to Arbroath. There are several villages, viz. East and West Haven, Panbride, Skrine and Muirdrum; at the latter of which is a post office. In the northern part of the parishstands the house of Panmure, with its extensive enclosures and plantations, the property of the Hon W Ramsay Maule, but at present the residence of his brother the Hon Capt Ramsay."

You can see pictures of Panbride which are provided by:

You can see the administrative areas in which Panbride has been placed at times in the past. Select one to see a link to a map of that particular area.