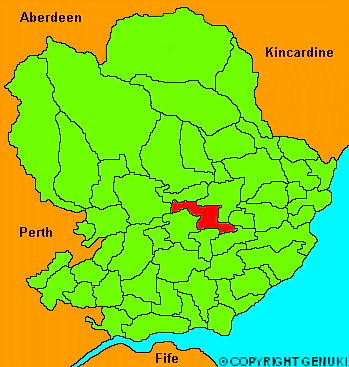 " .... of an irregular figure, comprehending about 16 or 18 miles, mostly in cultivation, with some thriving fir plantations, and very little waste ground. The soil is various, being partly rich and fertile, and partly poor and unproductive; but of late, has been greatly improved by the use of marl, which is found not only in the loch of Rescobie, which occupies the middle part of the parish, but also in the lochs of Balgavies and Restenet, one of which bounds it on the North East, the other on the South West. The loch of Rescobie is about a mile long, and half a mile broad, and is one of the lakes formed by the river Lunan, in its course towards the bay of Lunan, where it discharges itself into the ocean."

You can see pictures of Rescobie which are provided by:

You can see the administrative areas in which Rescobie has been placed at times in the past. Select one to see a link to a map of that particular area.