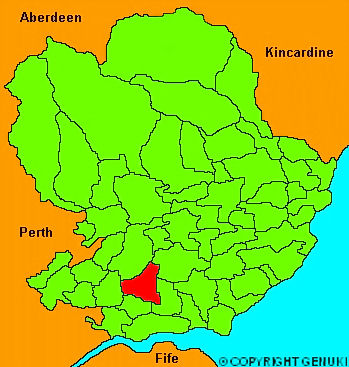 "Lying on the south side of the Sidlaw hills, about 8 miles from Dundee on the road to Glammiss. It extends about 3 miles in length, and from 1 to 2 in breadth, watered by the small river Fithie, a tributary stream of the Dighty. The surface slopes gradually from the mountains towards the South, and the soil varies from a light loam to a rich black mould, and a strong wet clay, very retentive of moisture. Agriculture has been much attended to, particularly irrigation or watering of meadow lands, which has been introduced and practised by Patrick Srymgeour Esq of Tealing, one of the proprietors, who resides in the parish. The highest of the Sidlaws in this district, is Craig-Owl, elevated 1100 feet above the sea level. About 380 acres are covered with wood and plantation. Besides several druidical circles, and subteranneous houses, this parish affords several relics of antiquity, which are with great probability ascribed to the Romans."

You can see pictures of Tealing which are provided by:

You can see the administrative areas in which Tealing has been placed at times in the past. Select one to see a link to a map of that particular area.