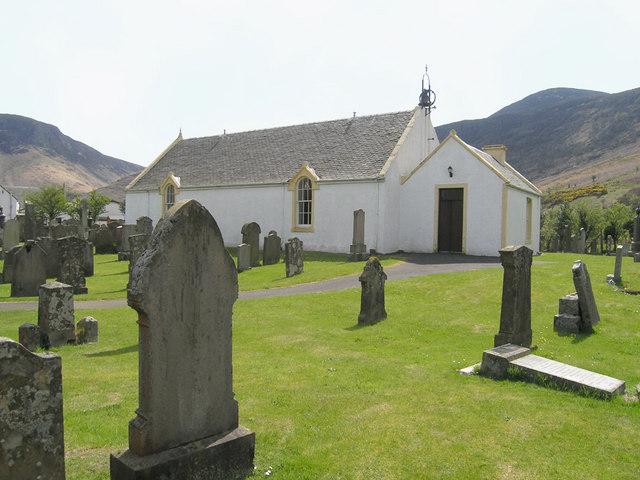 The New Statistical Account states that the church at Lochranza was built in 1795. On its E wall is a stone dated 1712, and there are stones of still earlier date ie 1675, 1680, in the churchyard; it may therefore be presumed that there was a previous church on this site.

A few feet in front of the E gable is a narrow slab with a fine design of Celtic knot-work, the only stone found on Arran with this style of ornamentation.

There are several very weathered stones in the churchyard but no early datings or Celtic knot-work could be identified. The church nameboard bears a dedication to St Bride but this was introduced by the previous incumbent. The Minister (T Hawthorn, Lochranza) suggests that the Parish Church of Lochranza was originally dedicated to St James. He has, however, no documentary evidence to this effect but adds that the church records were destroyed about 80 years ago.

The present church, situated 250m from the head of Loch Ranza, replaces a building of 1795 (1). However, stones of 17th-century date have been recorded in the burial-ground and the field to the S bears the name 'Achadh an Teampuill' ('field of the temple'), indicating the existence of an earlier church (2). A carved slab was found outside the E gable of the church about 1910, but its present location is not certain.

The only record of the slab is an oblique photographic view from the side, which shows that it was long and narrow, with an elongated central panel enclosed by a plain moulding. The panel contained irregular interlace divided into three sections, the middle one being very short. The age of this carving is uncertain, and the moulding is characteristic of late medieval slabs, but the interlace may contain foliage elements and it appears to bifurcate in a way that is found in Scandinavian-influenced sculpture.