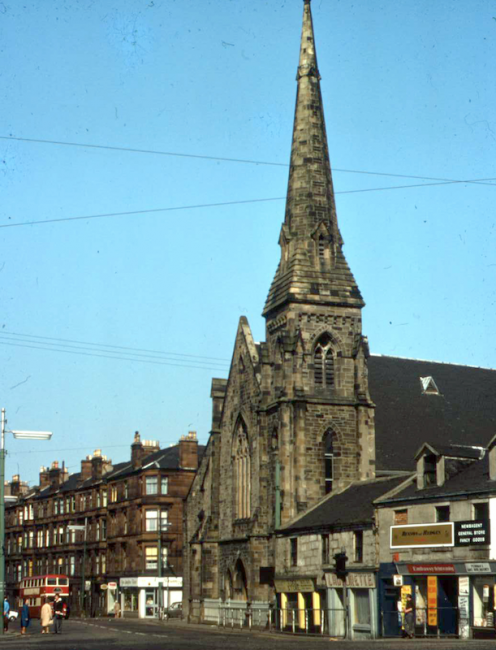 The foundation stone of this church was laid on 30th September 1871 by the Reverend John McDermid of Cumberland Street Reformed Presbyterian Church.

This church was erected in 1871-72 at a cost of £3000 and was initially a Reformed Presbyterian place of worship, but afterwards came into possession of the Free Church when the two denominations were United in 1876. In October 1929 the Church Union was celebrated and the church then became known as The Rutherglen East Church of Scotland.

It is an early English building with 750 seats and has a southwest tower and spire rising to a height of 128 feet.

Now only the central spire remains and the building itself has been converted for community use.

The story of the East church begins in 1870 when, on 17th April, a small number of churchgoers from various Presbyterian churches and the Rutherglen Independent Church, who had already been gathered together as a small Mission, decided that another church was necessary in Rutherglen.

Churchmen, numbering 27 in all, presented a petition to the reformed Presbyterian Synod of Glasgow asking permission to form a congregation and that the presbytery should appoint a missionary to rule over them and guaranteed to pay this missionary 100 pounds per annum. This was not granted by the Free Church Presbytery but It was later accepted by the Reformed Presbytery Synod.

The petition was granted on the 27th of April 1870, and Mr. T.W. Patrick, a third-year student and missionary at St Luke's Presbyterian Church was appointed to commence his duties on 1st May 1870.  The formal election into a congregation was carried out and 70 persons were received into membership.

The East Church has no photograph of its first minister.  At one time it had been possible to borrow a picture from the Rev. A. M. Gibson of Wardlawhill.  This picture used to hang in Mr Gibson’s vestry.

Although Mr. Patrick was appointed as missionary, it was not until 1871 that he was licensed and then only on the condition that he attended the fifth year classes in Glasgow. On this condition being agreed, Mr. Patrick was duly elected a minister in November 1871, and for his election his call was signed by 97 members and 62 adherents.  His ordination took place on 21st December 1871.

Sufficient funds were then raised, and the building of the church commenced on ground which was presented to the church by Dr. William Scott, Ruther House, Rutherglen.

The foundation or memorial stone was laid on 30th September 1871, by the Reverend John McDermid, of Cumberland Street, Reformed Presbyterian Church.  A jar containing items in connection with the founding of the church was placed inside the stone by a Mr. Francis Wilson, one of the members.  The position of the stone is thought to be in the north-east gable.  A sketch of the church as originally planned was drawn.

The building of the church only was finally completed and opened for public worship on 10th November 1872. It is worth noting that this was the last Reformed Presbyterian Church to be built in Scotland, and the second Free church in Rutherglen, the first being the Munro Church which was built just after the Disruption in 1843.

In “Rutherglen Lore” it is stated that the second Free Church to be established in Rutherglen is that at the corner of Farme Loan Road, known as the “East United Free Church”.

This church was erected in 1871-72 at a cost of £3000 and was a Reformed Presbyterian place of worship, but afterwards came into possession of the Free Church when the two denominations were United in 1876.

It is an early English building with 750 seats and has a southwest tower and spire rising to a height of 128 feet.

Mr Patrick continued as minister until 1877, unfortunately the records for the first 10 years are very scanty. In fact, the earliest minute of the Deacons court existing is dated May 1881, (10 years after the church was founded).

In the early days, March 1876, several members were cut off the roll for non-attendances and, at a later date, a Deacon had to send a written explanation as to why he had not attended morning service on a certain Sunday, notwithstanding the fact that he had been present at the afternoon and evening services.

In addition to the session minutes information was found in the “Reformer” of February 1876 as follows:

“Sir, I was amused as well as grieved at the disgraceful exhibition which took place in our church on Monday last. I do not see the use of discussing important points of church discipline while some of our members are possibly under the influence of Bacchus.”

Another extract in June 1876 tells how Mr. Patrick sprained his ankle by falling out of the train from Edinburgh, whilst talking to a friend at Whifflet station, on his return from the celebration of the union of the reformed Presbyterian and Free churches.

In the edition of 1st July 1876 there was a paragraph stating that the church would now be known as “The East Free Church”, which name had actually been agreed upon at a session meeting in Park Villa, Rutherglen, held in June 1876.

Unfortunately, a strong feeling of dissension crept into the congregation and in May 1877 Mr. Patrick resigned after having been suspended by the Glasgow Presbytery. Prior to this, the number on the role had been 237 but, owing to the dissension the number fell to 69 members during the course of one year.

The Rev, R.G. Smith preached the church vacant by Order of the Presbytery in May 1877, but, owing to a misunderstanding, there was no minister present at the afternoon service, and an elder conducted the service.  He intimated the 103rd Psalm and, while he was reading the first verse – “Oh thou my soul bless God the Lord.” – the majority of the congregation left the Church.

At a meeting of the congregation called for the purpose of filling the vacancy, on 3rd July, 1877, it was moved and seconded that as the congregation had no fault to find with the ministrations of Mr Patrick, he should be reinstated immediately.  This motion was passed with acclamation, but the Presbytery refused to rescind their decision.

Eventually, a further meeting was held in January 1878, and the Rev. William Armstrong of Kirkcolm Stranraer was elected, taking up his post in March 1878.

1904 Deacons' Court agrees to the purchase of an organ

In July 1904, the Deacons' Court agreed to the purchase of a pipe organ at the cost of £700. It was purchased from Messrs. Norman & Beard, Norwich.

"In 1910, the coal pits took a hand in our church again, and on a Sunday afternoon, Mr Lindsay suddenly stood up in his pulpit after he had given the Benediction, to intimate an announcement he had earlier forgotten. While he was doing so, there was a crash, and a few screams, as a large quantity of plaster fell from the roof of the church into the aisles, and part of the choir. Fortunately, no-one was hurt but it was an act of Providence that made Mr Lindsay forget this intimation, otherwise the aisles would have been filled with the congregation leaving the Church Service."

26 of the men of Rutherglen East Parish Church paid the Supreme Sacrifice. There was a memorial tablet at the front door of the church, which was unveiled on 13th November 1921.

1925 Purchase of a Manse for Rutherglen East Parish Church

The Manse was "Ardlui" (named after a pretty location at the head of Loch Lomond), no.23 Melrose Avenue, Rutherglen. It was purchased for the arrival of the Rev. A.H. Taylor, M.A., of Abernethy, who accepted a call to Rutherglen East, on 21st January 1925. At his appointment, the membership on the communion roll was 445. These were difficult times because the General Strike, which lasted about a fortnight, took place in 1926.

In September 1929, the church had its last meeting as a United Free Church and, in October 1929 the Church Union was celebrated and the church then became known as The Rutherglen East Church of Scotland. The next important date was on Wednesday 16th November 1932 when the church celebrated its diamond jubilee. Provost James Kirkwood, O.B.E., J.P. attended the celebrations. An organ recital was given by Mr W.S. Gibson, L.R.A.M., the Church Organist.

Following a period of ill-health, in 1960 the Rev A.H. Taylor retired, having served 35 years from 1925. He had been the fourth minister of the charge.

In June 1964 a baptismal font was presented to the church by Mr J.K. Rodger in memory of his wife.

During Mr Devlin's ministry which began in 1961, the "Rockets" (formed for pre-Boys' Brigade), and the Boys' Brigade were run by Mr Alan Devlin.

On Monday 17th April 1972 The Induction of the Revd. Brian S. C. Donald L.Th. took place. Mrs. Cecilia M. Donald was unable to attend the induction or the social due to the imminent arrival of the third junior member of the Donald Family. Elder siblings Louise and Andrew, greeted the arrival of their baby brother, William, early in May 1972.

After his studies at Christ’s College and Aberdeen University, Brian Stuart Cooper Donald trained for the Church of Scotland Mission Field at St. Colm’s College, Edinburgh. In 1968, with his wife Cecilia, daughter Louise and son Andrew, he left Scotland for Pakistan, serving at Daska High School and Boys’ Hostel, for three and a half years. On his return to Scotland, he was Ordained and Inducted to Rutherglen East Parish Church in its Centenary Year of 1972. Having served as its last minister, Mr. Donald left Rutherglen East in September 1979 to become the minister of Monquhitter & New Byth in Buchan Presbytery serving for over 18 years. During that time he was precentor and pianist for Buchan Presbytery, which he also served as Moderator in 1987-88. Mr Donald died on 5th August 1999, aged 66.