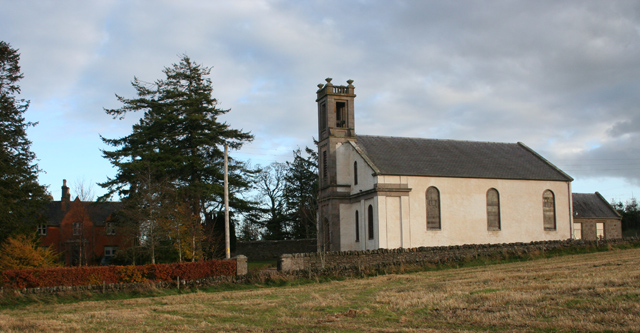 Alves Parish Church dates to the mid 19th century and was originally built as a Free Church. It was extensively refurbished and had a new roof added in the 1870s. The church stands in small grounds alongside a quiet, rural road and the large former manse is to the north, set in quite large garden grounds. There are large open fields around the church and a small area of woodland just to the north. The village of Alves is a short distance to the north-east.

The kirk stands a little distance from Crook of Alves, the only village in the parish. Pronounce it AH-vess - the 'l' is silent. It was built, in 1845, as a Free Kirk, and the architect is thought to have been John Urquhart of Forres, and was renovated in 1878. Following amalgamation with the Church of Scotland congregation in 1931, it has continued in use as the principal place of worship in the parish. Inside the kirk are two 17th century bells, made in the Netherlands by Michael Burgerhys in 1637 and 1639, removed from the old parish kirk in 1978 to commemorate the centenary of the renovation. The kirk and its encircling drystane dyke are listed Category B.