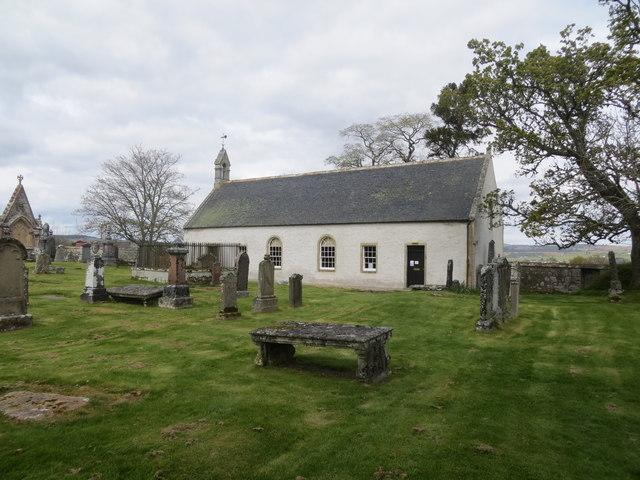 © Copyright John Ferguson and licensed for reuse under this Creative Commons Licence.

St. Columba's Church, parish church of Kincardine is listed as one of the churches of the Diocese of Ross (Macrae 1923) and seems to occupy the site of its predecessors. It was built in 1799.

The church is believed to occupy the site of a previous church or churches. It is now disused. On the lintel of the door on the south side of the church at its east end are the initials M A.G. and the date 1799.

The graveyard contains a recumbent graveslab.

This substantial slab is carved in relief on two of its narrow faces. According to the Statistical Account, ‘the ends and sides are full of figures and characters’, but any such carving on the other two narrow faces and the top has been obliterated, and two hollows have been created in the underside. Above a plain flatband moulding along the base, the two carved faces are framed by a roll moulding. The long face A is divided into a long panel flanked by two short panels by vertical roll mouldings. The left-hand panel contains an image of the hunt, with a horseman and two hounds in pursuit of a stag, all moving to the right. The central panel shows, from the left, two long-necked quadrupeds sitting enmeshed in a bush vine scroll, an image of David rending the jaws of a lion with a sheep above his left shoulder and a harp above his right shoulder, and two horsemen side by side riding to the right. The last panel contains two angels. Face B displays a figural scene which is now difficult to discern.

The church is now home to the Kyle of Sutherland Heritage Society.