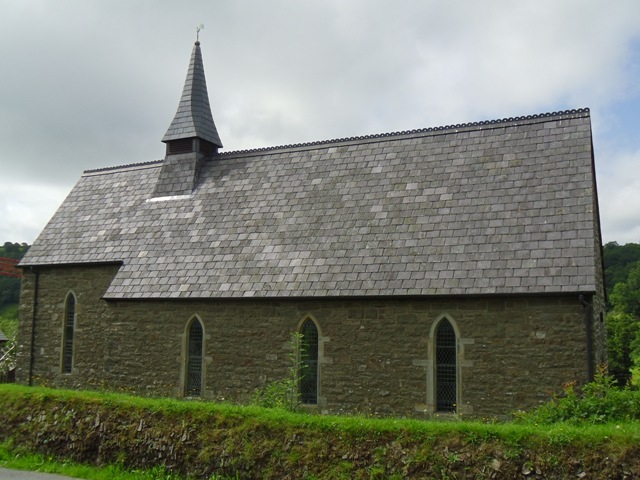 Quotations from the above ;

"The current church having been built in the nineteenth century in a different spot than the last church, and little remains to indicate the age or location of the old chapel.No trace of this original church remains except for the medieval font.The current church was built in 1858."

"Llanfraed; This chapel stood on Dyffryn-Llynod land in the Cerdin valley, in a field that is called at present "Cae'r Capel". It went under the name of Llanfran in the parish records of 1720, but if you look at Speed's map of 1610, the name there is "Llanfra". In a later map by Kitchen we get the name "Llanfrai". The belief is that the chapel was dedicated to St Ffraed, and was known locally as Saint Bridget or Saint Bride.  .......(part extract) .......... the last to preach at the chapel was the Rev Thomas Griffiths, vicar of Llandyfriog ................the parish records reveal that the Rev Thomas Griffiths married David Davies, clerk, Llandyssul, and Sarah Lewis, on November 21st 1789, in this church.  The two stone stiles of the graveyard are still there ...........The parish records do not state who was buried there ...........It was David Davies, Dyffryn Llynod ........who ploughed the graveyard, and his sons, Thomas, John, Dafydd and Evan, who buried the bones that they found in one pit near where the chancel used to be. "  [The text does name people who were believed to be buried there]