DAVID LEWIS was born in 1760 at Derwen Groes in Abergwili, Carmarthenshire the son of David Lewis and his wife. He had a twin sister Elizabeth and two other sisters Mary born in 1764 and Anne born in 1765.

David Lewis studied at school in Llanpumpsaint and subsequently at the Presbyterian Academy in Carmarthen, Carmarthenshire under Robert Gentleman. He then matriculated from Jesus College, Oxford in June 1782 but there is no record of him obtaining a degree.

David Lewis was ordained in 1785, and initially he taught in Oswestry, Shropshire where he was also the curate. This was  prior to moving to Abernant, Carmarthenshire in 1787 (adding the parish of Cynwyl Elfed later in the same year).

‘his grandfather (Rev David Lewis) always traced descent to a Cardinganshire Family Lewis of Llanelwydd later known as Llanelwedd which is a village near Builth Wells, in Powys, Wales and lies within the historic boundaries of Radnorshire.

A letter dated 10 July 1885 from Rev. David Philips Lewis to his cousin Thomas Lewis he states:

‘In tracing out a family it may be of use to know that we are related to the Howells of Glaspant, a Squire Family, living, I think, in the parish of Cilreddin - Carmarthenshire’.

Rev. David Lewis also became rector of Garthbeibio, Montgomeryshire in 1794, and continued to serve these three parishes until his death. Rev. David Lewis was a widower for 25 years before his 2nd marriage to Anne Christopher widow 1772- 1851

In 1825 he was King’s Commissioners for Affairs of Taxes and secretary and treasurer for the Bishop of St. David’s institutions.

In addition to serving as a magistrate for Carmarthenshire, he supported the eisteddfodau held in the county.

His translation of a book on the catechism was published.

He lived in Cilwen, Abernant and died on 28 July 1850, and was buried in St Lucia’s Abernant.

‘I am just returned from a fortnight’s visit to Dr Lewis of Worcester.
He lives in the greatest respectability among the primordines of the place, - in a sumptuous house with a genteel establishment. His wife is one of the most accomplished little personages I ever saw; - and her great accomplishments, when compared to her goodness and piety, do certainly retire out of view.
’We were favoured every evening at tea with evident proofs of very liberal munificence to the family from Farndon, and which was very properly and tenderly appreciated.

Dr David Lewis aged 36  married Isabella Phillips in 1820 and they had three children.

He returned to England and married for the 2nd time to Caroline Lewis a distant cousin and with her had two daughters Mary and Emma. Caroline died in Ludlow in 1859 aged 65

In Pigot’s 1834 edition Dr David Lewis is listed as a doctor MD living in Dinham, Ludlow.

Some of his relatives (cousins) were: Rev. John Lewis, Bishop's Curate of Llandrinio, Llanymynech, and Rector of Hirnant, Montgomeryshire whose sons were: 1) Rev. Edward Lewis, Rector of Newtown Co., Montgomery (married to Charlotte Wynne of Dolardden, Castle Caereinion, Montgomery) whose son was Rev. Edward Lewis, Curate of Patrishow who succeeded his cousin the Archdeacon Henry Thomas Payne, who bequeathed him the estate after which he became Rector of Llanbedr near Crickhowell, Breconshire (and was married to Charlotte Auriol Drummond Hay - grand daughter of Robert Hay-Drummond who became the Archbishop Bishop of York 1761-1776). 2) Dr John Lewis of Half Moon Street and Connaught Place, Hyde Park,London. A Surgeon, and; 3) Thomas Lewis, a businessman who sank a fortune into London and  into Russell and Bedford Square. This Lewis family is also connected to other historical figures with descendants of Rev David Lewis having married into the families of: De Mortimer (later Mortimer), Gresley (of Drakelowe), Hely- Hutchinson, Campbell's of Loudon (Scotland), Morgan, Phillips and Jones families to name a few. A present day cousin of Jim, and mine, is Charles Michael Henderson (aka 3rd Lord Faringdon - Lord to Queen Elizabeth II) of Buscot Park, Faringdon, Oxfordshire, UK, whose 2nd great grandmother was Frances Isabella Stephens (Countess of Donoughmore) who was the daughter of  Isabella Lewis, 3rd daughter of Richard Lewis of Tasmania - my 3rd great uncle and Jim's 2nd great grandfather, and the 4th son of Rev. David Lewis. 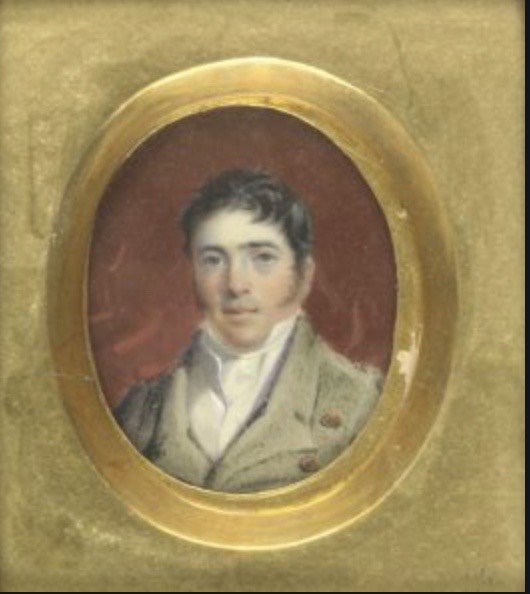 Richard Lewis, a merchant was the fourth son of the Rev. David Lewis  and Mary Ann Lloyd. His father Rev. David Lewis became the vicar of Abernant and Convil Elvet in Carmarthenshire in 1787. Richard emigrated to Tasmania, Australia in  1815 to Hobart and founded the business later known as R. Lewis & Sons which engaged in commercial and shipping pursuits.

In December 1816 he was appointed as the government appraiser and auctioneer which began his successful career in Tasmania as a merchant.

On the 23rd October 1816 he married Isabella Mac Kellar and they had six sons and five daughters.In 1823 he was one of the foundation proprietors of the Bank of Van Diemen's Land.He employed Bock to engrave banknotes for the new bank.

His original land grant was at Plas y Dolan, Clarence Plains. At his property at the corner of Collins and Argyle Streets he carried on his businesses from the late 1820s until 1845. Richard Lewis acquired several other properties , including twelve acres at New Town, later known as Springvale Tea Gardens, and nine acres at Bellerive described in his will as 'an Inn formerly called the Highlander, since known as the Devonshire Hotel and now known as the ‘Retreat’

He acquired farms in the Cambridge district, including Milford, Llanherne (Hobart Airport), the Neck, the Bluff, Abernant and Cilwen -this latter being named after his father’s home in Abernant and where his brother Dr Edward Lewis  died in 1834 .

In the 1840’s he made his two eldest sons David (later Mayor of Hobart) and colonial treasurer, and Neil partners in his businesses.

His portrait shown above was painted by Thomas Bock, an ex convict. Bock was a Birmingham artist and engraver who had been sentenced to 14 years transportation for trying to induce a miscarriage for his teenage mistress. Bock was granted a conditional pardon in 1832 allowing him to become a society portrait painter. The Lewis family  portraits are in the ALMFA.

Ref: The Allport Library and Museum of Fine Arts.

Dr.Edward Lewis was born in Oswestry, Shropshire on 1st February 1794 ; he was also the youngest son of Rev. David Lewis and his wife Mary Lloyd. Edward Lewis studied for his degree at Edinburgh and obtained his diploma in 1823 (archived in the Mitchell Library, Sydney. Aus.)

Dr Edward Lewis died on the 13th August 1834 at Cilwen the farmstead in Abernant where he was living at the time. He was buried in August 1834 in the Carmarthenshire Churchyard of St. Peters.
Samuel, Mary (his wife nee Kain) and his mother, Mary Anne Lewis (nee Race) who as a widow had remarried on 11 December 1834 at Fen Drayton Parish Church, Cambridge, England to a John Vessey, all emigrated to Australia on the vessel 'Ida' on 16th October 1854 - as Passage Contract Ticket.
Samuel died 5th August 1875 in Melbourne, Australia and his wife moved from Melbourne to Sydney with her son and  his family around 1896.
Mary Lewis (nee Kain) his wife died on 27th April 1904 in Sydney, NSW. His mother Mary Vessey (nee Lewis nee Race) died in 1879 aged 91
Samuel and Mary's son, Richard Race Lewis, was born 29th July 1860 in Geelong, Victoria, Australia and he married Ada Mary Prowse on 20th October 1880 in Melbourne, Australia. (most likely in Geelong where  her father, Edward Prowse, had an architectural business, and where Samuel and his family were living).
Richard was a preacher and a surveyor who died 13th January 1934 in Kiama, NSW and Ada Mary Lewis (nee Prowse) died at Kiama, NSW on 25th August 1933.
His maps, notes and letters from King George on the  Sydney Expansion Scheme are now with the State Library of NSW.