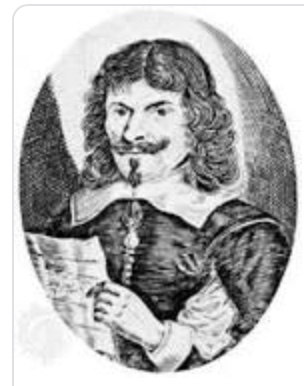 JAMES HOWELL was the son of a Welsh clergyman. A simple beginning. James had an elder brother Thomas Howell who became Lord Bishop of Bristol. James Howell was born in the parish of Abernant, Carmarthenshire at the beginning of the last decade of Elizabeth 1’s reign.

James Howell attended the free Hereford Grammar School and then went up to Jesus College, Oxford  on 16th June 1610. He graduated in Philosophy and Letters in 1613.

Howell's life began at a time of religious strife between church and state. James Howell lived under three kings and the Protectorate - Jacobean and Caroline eras. He lived through famous events: the Gunpowder Plot; Civil War; the execution of king Charles 1 and the Plague and Great Fire of London.

After graduation James Howell had a variety of employment, as an administrator for a glass manufacturer and often the combined role of secretary and instructor to several noble families. As factory agent and negotiator he travelled widely in Europe and learned to speak other languages with an easy facility. A gifted linguist Howell spoke eight different languages with Welsh being his native tongue. He compiled and English,French, Italian, Spanish dictionary as well as a collection of proverbs derived from those languages and from Welsh.

Howell was a loyal Anglican and Royalist cavalier. He returned to England from his travels on the continent near the end of 1624 to find that he had been elected a fellow at Jesus College, Oxford. Howell was short of stature and had a speech impediment possible resulting from an early incision in his cheek to drain an infection.

His experiences between the years 1632-1642 are a bit of a mystery -it is thought that Howell may have been simply a diplomat or possibly acting as a Royalist spy, employed for a number of secret missions.

In 1642 Howell  was arrested by the Commons for either debt or Royalist opinions and aged about 48 he spent eight years in the Fleet Prison. He spent this time writing firstly ‘Instruction for Foreign Travel’ in 1642 .

He also wrote the ‘Familiar Letters’ dedicated to Charles 1 which was to gain popularity in the literary circles of late C17th and early C18th in a conversational or ‘familiar’ style.
Howell was the first writer of an epistolary novel, a novel of letters. His gossipy, ‘coffee house’ style was popular with readers. Howell had a keen eye for detail and from a Royalist point of view he made historical and current events known to his readers. Howell is one of the very few authors of the C17th read in the  C18th. He is urbane, gossipy and conversational -
“ a clubbable man “ Dr Johnson would have called him.

Howell describes the social life of his times in the London Coffee houses as an observer of the incidents he recorded. This includes descriptions of the Plague, and other incidents which were all part of Howell’s world  described  as a bystander but with a reporter’s eye for detail.

Howell was great friends with Ben Jonson. Writers such as Defoe, Swift, Addison , Browning, Thackeray and Kingsley enjoyed his works. Thackeray said that;
‘ Montaigne and Howell’s Letters are my bedside books.’ ‘They talk about themselves for ever and don’t weary me.’

In 1661 James Howell was appointed Royal Historiographer to King Charles 11 on a salary of £100 per annum. He wrote New English Grammar in 1662 which included Spelling reform with a section on superfluous letters.

After his time in prison Howell lived in the home of a lawyer named Leigh until his death.
He was buried in the Temple Church

Proverbs 1659 contains his most famous quote,
‘All work and no play makes Jack a dull boy’