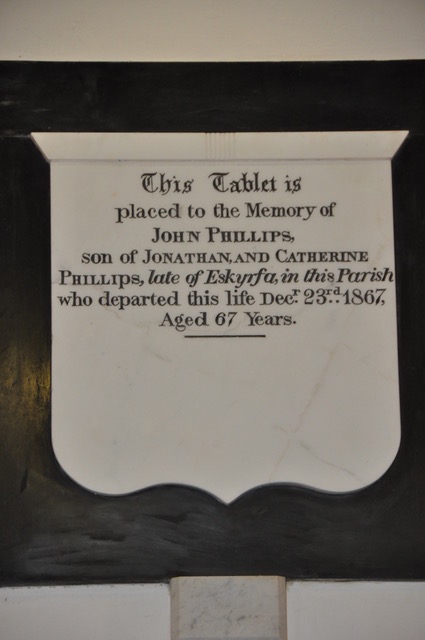 John Phillipps* was born  in 1801 at the farm Esgerfa in Abernant parish,Carmarthenshire.
John was the son of Jonathan Philipps (1765 Conwil Elvet -1849) and Catherine Howell (1770- 1849 of Rhydd y garreg ddu,Talog. Carmarthenshire.) John Philipps was also the nephew of John Howell - surgeon in the East India Company, whose memorial is adjacent to this in St Lucia’s Church, Abernant. Jonathan and Catherine Philipps had married on 1st June 1790 in St Lucia’s, Abernant.

‘I must not omit that he bears the best character for assiduity and regular deportment in school and at home: and such is the improvement of our country in dress, or rather perhaps the deterioration of it, that our Welshmen, in our great school, dress as well as in any part of England.’

After his uncle Rev.Thomas Thomas ’s death in 1826 John Philipps aged 25 undertakes renovations of the Manor House at Kibworth Harcourt.

Three years later, John Phillips now aged 28 married Elizabeth Smeeton aged 19
on the 30th July 1829 at Kibworth Beauchamp  by license and with the consent of her  parents .

A son, John Smeeton Philipps was baptised on the 17th Nov 1830 at Kibworth Beauchamp

On the 1841 census John Philipps says that he is aged 35 and that he was born in 1806 in Abernant, Carmarthenshire. Making himself a little younger?  He is living in Kibworth Beauchamp with his wife Elizabeth who is now aged 30 who was born in 1811 in Leicestershire.
John and Elizabeth’s son John Smeeton Philipps is aged 11 and John’s mother in law Elizabeth Smeeton is aged 70 (born in 1771)  and living with them.
Their housekeeper Elizabeth Day is aged 20 ; she was born in 1821.

In 1846 John Philipps is living at the Manor House in Kibworth Harcourt.

In a letter from  Richard Thomas at Haverfordwest in Pembrokeshire Archives we learn that
John Philipps bought the Manor House at Kibworth Harcourt from his uncle the Rev Thomas Thomas’s estate for £4450 on the 5th November 1855.

Later in  1863 we learn that ‘John Philipps had rebuilt the Manor House, Kibworth Harcourt with twin gables and barge boards as well as putting up a wall around the garden and land.
The brick front with its twin gables and ornamental barge boards is evidently his work.
The garden wall also built by Philipps carries tiles dated 1475, 1690 and 1860.’
As both he and his uncle were local antiquarians there may be good evidence for the earlier dates. About 200 yards north of the house are two fishponds probably of medieval origin.’

See also his will below

In August 1863 the above Society held its two day AGM in Kibworth
The following article is a transcript of a detailed report recorded in the Leicester Journal published on Friday, August 7, 1863.

‘In the afternoon a museum (temporarily formed in the National Schools by permission of the Rector) was opened to the members and the public.  In this exhibition the objects of antiquarian interest were numerous and interesting.  The list was as follows:-

On the 7th August 1863 later that day The Manor House, the residence of J Phillips Esq,
was visited, and the many objects of interest to antiquarians there afforded much pleasure.

‘Mr Phillips, after a good old English fashion, requested the members of the company to partake of good and homely beverage.’

In the evening about forty of the principal gentlemen connected with the Society (whose names are given above) sat down to dinner at the Rose and Crown.
Mr William Austin, the host, made admirable provision for his guests.

As soon as the dinner had concluded it was intimated that the time for the opening of the business of the meeting had arrived; and accordingly the company adjourned to the Grammar School, which the Rev J B Hildebrand had kindly placed at the Society’s disposal for the purpose specified.  A platform had been erected and upon it some of the leading members took their seats.  The room, which was of very small dimensions, was crowded so as to render the heat oppressive, especially to some of the ladies.’

John Philipps a letter to family in Wales.

‘Dear Sir,
I have seen the minister of the chapel this afternoon and he will send the rent down to you in about three weeks time, be so kind as to send me how much he owes you.There is no tithe in this parish and i can’t give you my account of other parishes.
You asked what family I have only one son and he is in a very good situation at Leicester in a country house, he is nearly 24 years of age and very steady. My dear wife has been dead 6 years last August, almost all your old friends at Kibworth are no more.
I shall be very pleased to see you at Kibworth to spend a week or two with me.
Let me know when you will be likely to come. I shall be in London about the 2nd of January for a week or two.
I was at Dublin last August and through North Wales and I enjoyed the trip very much.
Give my best respects to your family and let me know how many you have.
I remain,  dear  sir
yours truly
J Phillips

P.S.  I have one of best Durham bulls in the county 2 years old on the 13th of last month he has now served a great many cows this last summer at 6s per cow the mother was counted the best cow in the county and was got by one of the Marquis of Exeter’s bulls.

Ref: Information extracted from Family Letters  which were deposited at both the National Library Wales and Pembrokeshire Archives at Haverford West.

in the county of Leicester Gentleman

"I appoint my son John Smeeton Philipps, my nephew Thomas Philipps of 182 Piccadily son of my brother Thomas Philipps and my friends Thomas George Langham of Oxford Terrace, London, Butcher and John Langham of Walton by Kimeck ( Walton in Knaptoft?)  in the county of Leicester, farmer joint executors of this my will.

I give the sum of nineteen guineas to my friend Emily Sarah Slatter * and the sum of ten pounds a piece to my three executors Thomas Philipps, Thomas George Langham, and John Langham.

and I empower my trustees and trustee for the time being but without prejudice to any preceding estate or interest thereon to appropriate at discretion the annual income of any share in my property to which any person for the time being be presumptively or contingently entitled for his or her maintenance or education notwithstanding minority and I direct the unapplied income to accumulate and to be added to the share from which it may have been derived and subject as aforesaid I empower my said trustees and trustee to advance for the benefit of such person any part of his or her presumptive capital share  for his or her benefit or advancement in the world
|
I give unto my housekeeper Elizabeth Day and her assigns for her life the sum of twenty pounds per year.

I give all my household and personal estate and effects subject and chargeable to and with the payment of my debts ( except mortgage debts as aforesaid ) and subject and chargeable to and with the payment of the said annuity and the legacies here fore unto given unto my said son absolutely.
I devise all real estate vested in me by way of mortgage security or on any trust unto and to the use of the said John Smeeton Philipps,, my said nephew Thomas Philipps, Thomas George Langham and  John Langham their heirs and assigns subject to and upon the several equities and trusts affecting the same

‘ This tablet is placed to the memory of John Philipps son of Jonathan and Catherine Philipps late of Skyrfa in this parish ‘ with the date of my demise annexed. I revoke all former wills in witness whereof I have to this my last will and testament contained on four"

On the 1861C Emily is a visitor with the Hamphrey family at Stoke Hall in Stoke Albany  where she is described as ‘formerly governess’.

On the 1881C Emily is 62 and an annuitant living with her widowed sister Arabella Thurnham in a lodging house 48, Belzize Road, Hampstead.