My father, Jack Bowen, played for New Dock Stars, Llanelly and in the Final Welsh Trial for the Probables in January 1938, they won but my father was the only change to the Welsh team that met England the following week at Cardiff Arms Park, despite “Old Stager” writing that he would have been better value than A M Rees who was eventually chosen. As a result dad signed for Wigan, played 10 years (minus 3 years due to war service) and a final year at Leigh RL club at the behest of his friend Emlyn Jenkins (of Treherbert). who was their manager at the time and had a great career in the RL game. Dad also played twice for the Welsh RL team.

He also was a publican in Wigan for 24 years before retiring and died in 2009 totally “compos mentis”, one month short of his 94th birthday. He left memorabilia which included quite a bit of rugby stuff, but more recently, one of the things I found was a letter addressed to my father from someone who apparently knew him in his Welsh playing days (1930’s).

His letter dates from 1988 (I never throw anything away), the writer is a certain J R “Joe" Jones who lived at Pontardawe, near Swansea.

He played for Pontardawe, then Neath and then Swansea, before signing for Hull RL just after the war, in his words, “I had a couple of seasons there with varying success. Perhaps I lacked the dedication needed, for as a single bloke I was ever eager to sample the fleshpots of that very wicked town”.

He continued and mentioned his wife from Cross Hands, his two children, his son went to Oxford and was a teacher in London while his daughter after Uni at York had married and settled in Liverpool, endowing his two grandchildren with broad “Scouse” accents. He himself, after life at Hull RL, began a career in journalism and spent 20 years in London.

Apparently “Joe” had written to my father after his old friend Bryn Lewis had loaned him a history of the Wigan Club, a book that dad had sent to Bryn originally (I’ve no idea what that book might have been exactly, something along the lines of Wigan RFLC history, and would have included mention of many Welshmen).

Rather flatteringly Joe mentions that although they probably didn’t clash on the field, he "still retains one outstanding recollection of you (dad) standing in the Old Mountain Hare pub in Cwmllynfell offering odds on your team, New Dock Stars (a great feeder club for Llanelli), beating the then Cwmllynfell ‘Invincibles’. As I recall it, that was one bet you lost, but my word, I have never forgotten the superb confidence you oozed that evening.”  Now whether or not this was dad I’m not sure, but it certainly is a great memory.

During the war, Joe spent time at RAF Ternhill (not too far from where we live in Codsall). There he was persuaded by Alan Laird a New Zealander and Oldham RL player, to have a few games for Oldham. The first game was against Wigan, who had in their team the likes of Jim Sullivan, Johnny Lawrenson, Joe Egan, Eddie Watkins, Joe Jones and Hector Gee of whom he says “you couldn’t see the scrum for the breadth of his shoulders” - strange what your presence on a rugby field can do to your perception.

The main purpose of the letter was for Joe to introduce himself to dad, in the hope that when he visited his two grandchildren in Liverpool he might be able to visit him in Wigan at the same time. Alas I don’t think that ever took place. However, we did get visits from Loughor and New Dock Stars Touring teams in the late 1950’s and early 1960’s, the locals talked in glowing terms for years about their singing in the pub at night.

“Another of your old (Llanelli) team mates Gwyn Thomas (Llanelli and Oldham), who was captain of Pontardawe when I first played for them. He’s quite a turn these days at the Clwb Fach, Cwmllynfell, playing the piano with a sequin-spangled suit, a la Liberace."

“Incidentally did you know that poor old Ted Ward passed away a couple of weeks ago (this letter is dated July 2nd 1988). It was all very sad, for all his great exploits on the field his death went largely unpublicised in the local papers. Poor Ted, he was never the same bloke after the death of his mother to whom he was devoted. Missing her care he preferred a few pints in the Half Moon to a square meal. So much so that at one stage he had to be treated in hospital for “malnutrition.”

Here is yet another Gwaun cae Gurwen rugby player from my father’s era, he played in the same Llanelly team, as did Ted Ward, who was born in Garnant.

He is Emrys Evans, here in the Welsh RL team v England in March 1945 at Central Park, Wigan. My father is on the front row, extreme right, while Emrys is on the back row, second in from right. 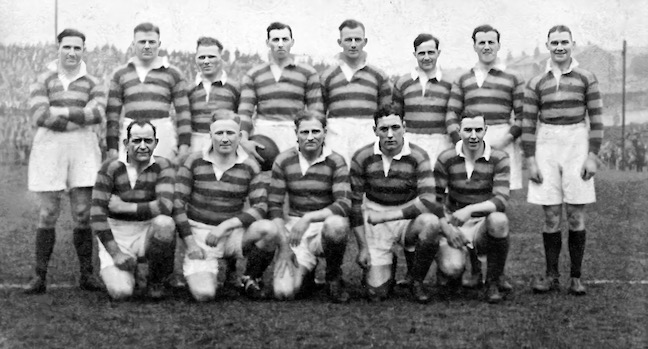 The following photographs are taken from a book called “Man of Amman” (Melling, Phil (1994). Man of Amman: The Life of Dai Davies. Gomez. ISBN 1-85902-083-6.  compiled from the stories told to the author Phil Melling 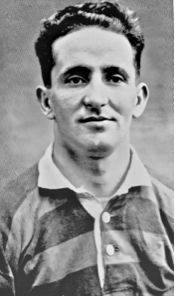 It details the life and experiences of ’that cheeky so and so” D M (Dai) Davies, Born Caenewydd, Gwaun cae Gurwen, around 1904. He “went north” in 1927, signed for Broughton Rangers then Warrington, Huddersfield and finally Keighley. Played for Wales RL and Other Nationalities.

If Dai had had more tact (he often upset the “wrong” people), he probably would have found himself on the 1932 Tour with GB “down under.” He also managed to reach no fewer than four Challenge Cup Finals. Despite being described as one of the “finest” scrum halves to “go north” from Wales and play Rugby League during a golden era, when the game attracted players of outstanding quality from around the world, Dai ended up on the losing side on all four occasions. Before going north, Dai played for Amman United (later Neath), their Headquarters were at the Half Moon, at Amman he played alongside Jack Elwyn Evans who later also went to Broughton Rangers with him. Dai played for Neath before he signed for Broughton.

At Broughton, Dai said it was hard work, saying he had to create the openings and score the tries, his English was weak (as weak, he said, as the rugby played by Broughton) and he had to speak English all the time in his digs. At home in Glanaman he’d been one of 5 brothers and 2 sisters and they all spoke Welsh (similar to my father, Welsh was the language of the home, English was something you picked up when you went to school). It was in his second season at Broughton when Dai got his teeth knocked out, as he was going over for a try, he was hit with a punch that nearly knocked him out. Dai got up and started running - anywhere - his gums were flattened, the trainer applied the “magic” cold sponge, to no avail, Dai had them extracted later.

His transfer to Warrington and other clubs were much more rewarding. At Neath, he received £3 no matter the result, and when combined with his Colliery wage he could earn £8 a week (£350 a week in today's wages), that was more than he could earn at Broughton. On the threat of a reduction in wages Dai went home and took Evan Phillips and Jack Elwyn with him, a telegram from Broughton arrived telling him to go to a phone at a certain time. Dai used the chemist shop in Garnant, run by Dai Evans (his son was a Doctor). . Dai answered the phone and he was told he could come back without the other two, Dai was having none of it and all three returned. The upshot was they returned to Broughton with a slight wage increase rather than the threatened reduction It wasn’t long before Dai moved on to Warrington and happier days.

His account reveals the trials and tribulations, not just the game itself, but the adjustments that were needed by Welsh players moving to a different culture, and the struggle it was for some fellow Welshmen, especially those with little English or whose English was weak. A few never adjusted to the different game, but most did, despite the difficulty in cultural issues. One thing that helped many of these young talented men to settle down, was to marry a local girl, which many did, including my father.

Their difficulties were probably similar for all Welsh players leaving home and trying to adjust to a new and “foreign” environment. It did remind me of the famous statement by the great Welsh and Liverpool footballer Ian Rush, who after a one year stay at an Italian club, is alleged to have said, “It was like living in a foreign country."

Perhaps more importantly from the main Rugby scrapbook point of view I’ve picked out a few photos from the book that might be of interest. 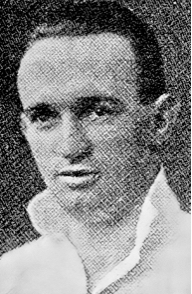 Billo Rees, who came from Garnant.

He was tough, and lightning quick. According to Robert Gate, Billo “was the most celebrated Welsh stand off of the 1920’s”. Played for Llanelli and was signed by Swinton in 1921. They were the Rugby League team of the 1920’s. Dai said the Rees family had 7 brothers, all rugby playing, but he said it was Billo who made it big. 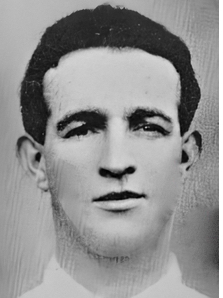 Joe Rees, of Amman and Swansea.

Dai said that with the exception of Jim Sullivan, Joe Rees was the best full back he ever saw.

I’ll finish with three team photos from the area taken from the book on Dai’s life; 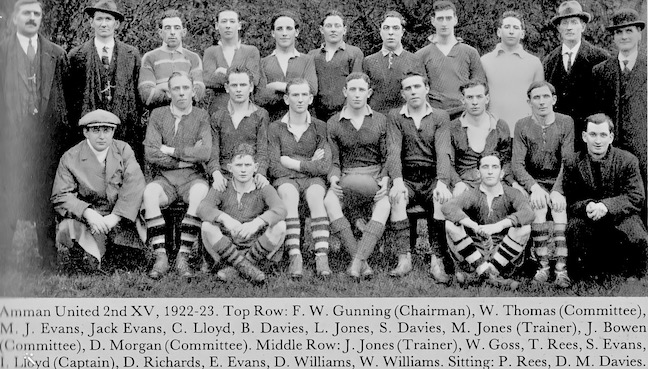 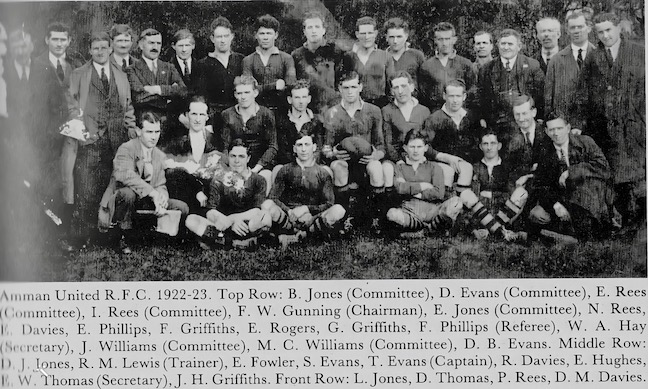 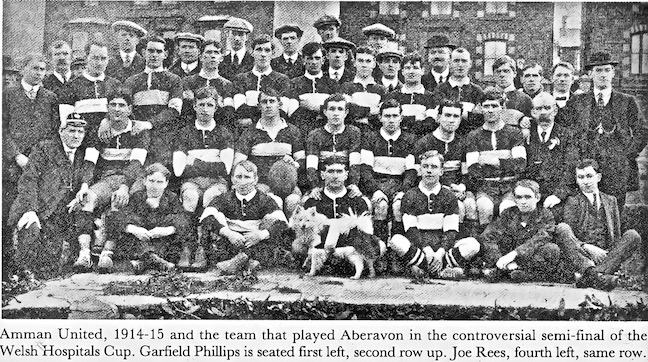 NB. We don't have the copyright owners permission to publish these photographs and will remove them immediately on being asked to do so by anyone who has the authority to do so.

These photographs may not be copied for any purpose whatsoever.