HOLY WELLS OF THE PARISH

The two Holy Wells, St. David's and St John's - are an interesting feature of the Parish. The fact that they are in Gothic type in the Geological Survey, a survival from ancient maps, indicates their former importance. We are justified in surmising that the Well at Nottage owed its origin to the Memory of St. David, for the axiom of archaeology states that, when found in proximity, the shrine and its adjacent spring both commemorate the identical saint. A chain of evidence is available showing that such was the case. The remains of an ancient roadway bearing the significant name of "Heol-y-Capel" (Chapel Road), can be traced through the Croft leadmg from The Holy Well to the site of the Vanished Chapel and the adjoining "Cwrt Offeiriad". Now this Chapel was situated on the west bank of the little valley, watered by Ffynnon Dewi (David's Well), which is known today as "The Rhyll", but in the 12th century was named "Dewiscumbe". These facts prove an intimate relationship between the little hamlet and the National Saint of Wales in Pre-Norman days the nourishing of a Davidian Cultus - and all that is implied by Saint David having been its Patron Saint.

It is regrettable that the memory of the Shrine and Valley has completely faded ; not without shame do we remember our neglect of the Holy well itself, which has been the means of our resurrectingthe past. A few years ago there was but a muddy heap of stones by the way-side; lately a partial restoration has been attempted, but without even indicating the name that gives it importance and interest. A more dignified treatment might be claimed for what is an abiding monument to one whom we hear so much about on the Kalends of March, - and so little of, for the next twelve months. Many are still spared who can remember It as it was some forty years ago. The limped water, of a constant depth, flows to the rough stone font, unaffected by winter flood or summer drought, incapable of gain or decline The rivulet still makes tremulous music as it meanders down the little valley of Dewiscumbe. Here, in mediaeval days, many a pilgrim quest found its consummation, and even today the idyllic surroundings appear to summon up the long-vanished atmosphere of the Welsh Saint.

The Holy Well in close proximity to the Parish Church at Newton, and possessing a like Patron, has also a lay name "Sandford Well" - which sheds considerable light on the time of the Church's original foundation. Now it is Impossible to seriously doubt, when certain external evidences are considered, that Sir Thomas de Sandford had as much to do with the original foundation of the Church as with that of the Well. Dre-Newydd, Nova Villa, New Town, by whichever name be it called, was a dowry on his marriage, a "dot" of a new village, and it is not likely that he confined his legacy to it to the mere well, when we remember its intimate connexion with the Church.

The interesting phenomenon of the miniature tide of the Holy Well may be noticed, but it is unnecessary to quote the Latin Hexamaters written thereon by Sir John Stradling, and published in Camden's Britannia in 1607, with an English translation in 1610, since they can be read on its walls. The well, oval in shape, of 6½ft. and 4½ft. diameters and 13½ft. in depth below the surface, with a covered flight of 20 steps, is about 85 yards south of the Church, and about 500 yards from the shore : its position is marked on a map of Dutch origin of 1646. A range of sandhills, about 20 feet high, lies between it and the beach, on which is a ridge of pebbles brought chiefly as ballast in ships which used to come in search of the Carboniferous limestone cropping out along the shore.

The Well is sunk in the Keuper conglomerate which overlays the carboniferous limestone down to a line which, running along the beach, is situated about two-thirds of the distance between the marks of high and low tide. An immense volume of land water, which also feeds the well, flows seawards over the limestone through this highly-fissured conglomerate. When the tide is out, the land water has its outflow or "Eye" along this edge of conglomerate or line of outcrop on the shore, and causes the sand at places to dance; one such place is indicated by a slab of concrete. This "Eye," sometimes referred to as St. John's Spa, is about 4½ feet below Ordnance Datum ; the basin of the well is about 11 feet above the same, so that the bottom of the well is about 15½ feet above this line of outflow on the beach.

High water mark of a spring tide is about 20 feet above Ordnance Datum, or about 9 feet above the bottom of the well, in which the water varies in depth from nil to an average of about 30 inches. The incoming tide covers the "eye," and dams back the land water, which rises in level in the conglomerate fissures. The tide on the beach, rising at the higher rate, reaches the high water mark, and then ebbs for a period varying from three to four hours before the release of the water which, in the well, is now at its highest mark. High tide in the well is thus reached. from three to four hours after the time of high tide on the shore. As the sea continues to recede, so do the thirty inches of water in the well disappear completely, only to reappear when the "eye" is again covered about three or four hours after the time of low tide of the sea.

The tide in the well is therefore regular, and corresponds to the motion of the tidal sea, only its establishment is from three to four hours later than the time of the tide on the beach.

The well water is slightly brackish, but imperceptible to the taste. The sea water, when at high level on the shore, passes through the strata to a limited extent; its free entry is restricted by the resistance of the sand and of the irregular fissures in the conglomerate. Rich in mineral salts, with a hardness of 28 degrees, this water was considered very suitable and agreeable for domestic purposes from the 12th century, till a piped supply of soft water was made available in 1907, and the quantity at a depth of a few feet is practically unlimited.

The water discharged on the beach deserves notice. Recent investigation has confirmed the tradition that the waters of this particular issue have extraordinary healing powers over external and internal ulcers, old wounds, rheumatisms, neuritis and various other ailments. Cold and clear as crystal, the scores of analyses that have been made in hospitals and by specialists, throw not the slightest light on the cause of the water's efficacy. Its temperature is about 51 degrees Fahrenheit at all times of the year, a sensation of intense cold is felt by the hand which, after a deep immersion lasting for about ten minutes, regains its warmth, and, for a considerable length of time after withdrawal, shows a decided redness. Investigation may prove the presence of iso-tonic properties which may account for the beneficent effect on the many visitants with divers ailments, who drink the water or immerse the affected parts.

St. John's Spa is renowned ; countless invalids have benefitted by their visits to "Doctor Dwr" (Doctor Water), who is always at home when the tide is out, and overs free treatment in a surgery which is thoroughly cleansed twice a day. In all probability, the therapeutic value of this water would be unknown in these days, were it not for the chance discovery of Dr. Hartland who has proved, beyond doubts, its curative properties.

Thus the waters of the Parish of Newton-Nottage are not only of medicinal quality, but, by a coincidence, are intimately connected with the names of saints. Few are the areas that can boast of two such Holy Wells, for St. David's Well at Nottage reveals St. David as its Patron in pre-Norman days, while St John's Well, Newton, helps to fix the date when he was superseded by the Baptist. 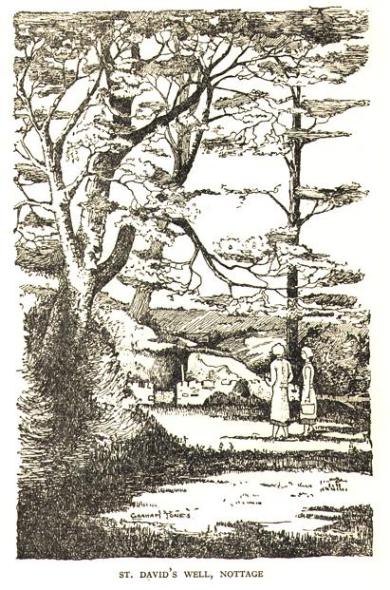 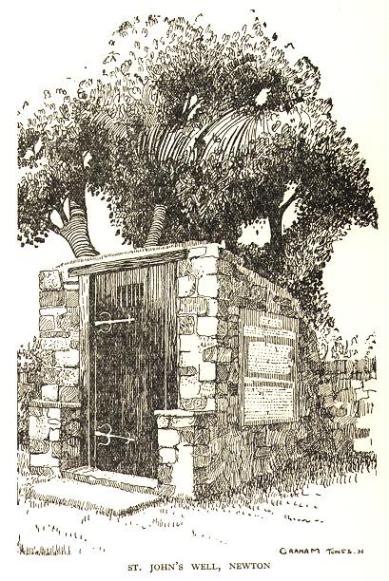