The windows, of which the earliest is dated 1874, merit detailed examination. The east window, of charming simplicity, said to be easily recognised by the expert as the work of Sir E. Burne Jones, was placed in memory of the Rev Edward Doddridge Knight, Rector, who died in 1873. The centre light shows Christ, King of Kings, holding the Orb which is the symbol of His dominion over the earth, an unusual artistic feature being Our Lord's beardless face. On the right is St. John the Evangelist and Apostle, the former title being symbolized by the eagle, which is on his right shoulder, while the chalice signifies apostleship. St. Peter with the traditional key and book, is represented in the left light.

Mrs. Edward D. Knight of Nottage Court, wife of the Rector referred to, is commemorated in the two-light window, known as the Mary Window, behind the Choir stalls. The left light represents the Annunciation of the Virgin Mary, the feast of which is in honour of the announcement of the Angel Gabriel to the Virgin : "Hail, blessed art thou among women." The emblem is a lily in a flower pot , Mary is kneeling at the table reading, Gabriel holds a lily stalk with a fleur-de-lis at its head, and each has the Nimbus round the head. To the right is depicted Mary Magdalene, stooping at the entrance to the sepulchre of the Risen Lord; round the Master's head is the cruciform nimbus, while the prints of the nails are clearly visible , the vase shown is that wherein the anointing spices had been prepared. "She saw Christ standing, but knew not that it was Jesus." "In Memory of Maria Knight, died 1881."

The north window in the chancel, in memory of Catherine Place, sister of the last named, presents, in its left light, the figure of St. Catherine, a Virgin and Martyr, wearing a crown to indicate her royal birth as well as her martyrdom, and holding a palm branch, which is the emblem of victory. Her left hand is on the Catherine wheel, between four of which, revolving in different ways, it was intended that she should be tortured. Fire and lightning are said to have destroyed her would-be tormentors, but this did not save her from being beheaded.

In the right light is shown The Good Samaritan : "A certain man went down from Jerusalem to Jericho and fell among thieves. A certain Samaritan had compassion on him and bound up his wounds, pouring oil and wine." "Go thou and do likewise."

The three-light chancel window was presented in 1919 as a memorial to Mrs. Frank Perry by her husband, who was a tradesman in Newton. The central portion exhibits Christ giving the exhoration - "Love ye one another" ; to the left is Charity with the basket of loaves, while the right light represents Maternal Love - a Madonna with the Holy Child, and John the Baptist as a boy playing near by.

The pulpit window in memory of Margaret Place, another sister of Mrs. Edward D. Knight, in the right light, represents St. Margaret, with a long cross resembling a sword wherewith she overcame the devil who appeared to her in the form of a dragon, while she was immured in a dungeon after having suffered dreadful tortures. The left light is of Dorcas, a woman "full of good work and alms deeds which she did" (Acts IX, v.36).

THE FISHERMEN'S WINDOW OVER THE WEST DOOR.

In this window is represented the scene at the Sea of Tiberias after the resurrection of our Lord, as recorded in the twenty-first chapter of St. John. "There were together Simon Peter, and Thomas called Didymus, and Nathanael of Cana in Galilee, and the sons of Zebedee, and two other of his disciples. But when morning came, Jesus stood on the shore, but the disciples knew not that it was Jesus. As soon then as they were come to land, there was a fire of coals there, and fish laid thereon, and bread. Jesus said unto them 'Come and Dine.' So when they dined, Jesus saith unto Simon Peter, Simon, son of Jonas, lovest thou me more than these ? He saith unto him, Yea, Lord thou knowest that l love thee. He said unto him, Feed my Lambs. He said unto him again the second time, Simon, son of Jonas, lovest thou me ? He saith unto him, Yea, Lord, thou knowest that I love thee.He saith unto him, Feed my Sheep."

A fourth century fresco, in the Catacombs of Rome, represents this same scene. On one side is a tripod on which a meal is being prepared ; next it, seven people are seated at table, beyond which are lambs and sheep , the Saviour himself is not represented, only the seven disciples without nimbus. The widow in Newton Church shows Christ as the Good Shepherd, with three disciples on either side and one in the ship , the Lord has the cruciform nimbus; sheep and lambs are included, but signs of the meal with fire for its preparation are absent. The artist, Mr. Newberry, introduced considerable variation from the traditional illumination, but the scene thus depicted, is a fitting expression of the love and veneration in which the Rector was held, as :

"This window was erected To The Glory of God And in Loving Memory of William Jones, Rector of Newton Nottage, 1873-1903, by Parishioners and friends".

"To the Glorious and Immortal Memory of the men of this Parish
who fell in the Great War for Freedom and Justice.
Their name liveth for evermore."

In Humble Gratitude
To Almighty God.
For Children Spared.

The Artist's purpose was to commemorate the Burning of Ypres, the Delivery of Jerusalem by the Welsh Fusiliers, and the Proclamation of Liberty at Baghdad-three fields of battle in which men from this parish were engaged-and to fuse the whole into one artistic scheme.

Accordingly he has depicted the Burning of Jerusalem and the Temple under Nebuchadnezzar, the Liberation of the Jews, and Rebuilding under Cyrus and the symbolism of the New Jerusalem. The upper part of the left side-light represents the burning of the Temple, which had been rifled, while military torch bearers march on their way to completely destroy the City of Jerusalem. Under the rule of Nebuchadnezzar, King of Babylon, who had installed a subject king over Jerusalem, the Jews had relapsed into idolatry, and, in the course of years, had become demoralized. Twice had Nebuchadnezzar restored stability, but this third visit was to quell a revolt under Zedekiah the last King of Judah.

In the lower part of the same light, Nebuzar-Adan, Captain of the Guard, is shown liberating Jeremiah the prophet, who, for his condemnation of the corruptions of the people, and for his warnings of the consequences of the wicked rule of Kings, princes and priests, had been manacled and incarcerated.

The lower part of the right side-light depicts Cyrus, the Founder of the Medo-Persian Empire which had absorbed that of mighty Babylon, restoring to Shesh-Bezzar, Prince of Judah, the gold and silver vessels that Nebuchadnezzar had taken from the Temple. Cyrus had been designated by name as the Deliverer of the Jews according to the prophesy of Isaiah (45th Chapter) as written on a 200-year-old parchment from which the prophet Daniel read to the King. Yielding to the pressure of such truths, Cyrus issued a decree permitting the Jews to return and build the Temple at Jerusalem. The Babylonian captivity was at an end and Shesh-Bezzar, the Chaldean equivalent for Zerub-babel, placed himself at the head of those of his countrymen whose spirit "God had raised to go up to build the house of the Lord which is in Jerusalem."

In the upper part of this side-light is represented one of the gates of Jerusalem, with the Temple appearing over it, and the people streaming in. The enthroned Christ is represented in the middle light, with the saints holding their palms at his feet, and with angels around the throne, from under which proceeds the River of Life, while the domes are those of the New Jerusalem. Above, in the tracery, are four angels bearing a scroll with the text, "The delivery of the bondage of corruption into the glorious liberty of the children of God."

This memorial to the Valiant Dead fittingly enshrines the names of sixty heroes, engraved on the brass tablet on the sill. The window was designed by Mr. Holiday, eighty years of age, and a proud pupil of the late Sir Edward Burne Jones. Its cost was defrayed by the late Mr. Ralph Green, of Dinas Powys, whose two sons returned safely from active service, one from the Western front, the other from Mesopotamia. 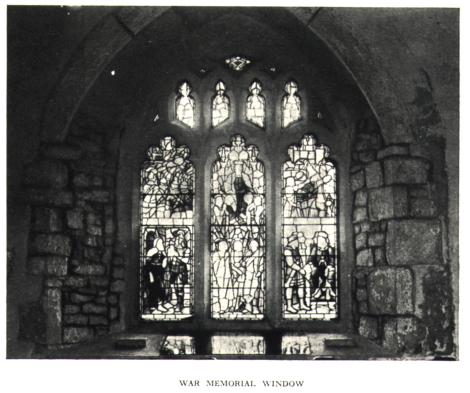