The first meeting of the church was held in a wooden shed at the bottom of the Viaduct on May 21st 1860 when Rev Alfred Tilly, Cardiff, came to preach to the English speaking Baptists of Maesycwmmer. This was on the request of Mrs Jenkins, the wife of Llewelyn Jenkins; the son of the famous missionary-preacher-writer John Jenkins (Sion Siencyn). It was John Jenkins who built Maesycwmmwr House in 1826, from which the village took its name.

On August 12th 1860 Rev Rich Williams performed the first baptism in the Rhymni River. The second took place on September 30th. The membership of the movement was growing as more English speakers moved into the valley.

A Sunday School was established on July 15th 1860 and the church was now meeting in a room kept in the nearby flannel factory. Wednesday evenings were for prayer meetings, held in the homes of the members.

The church was officially formed and recognised by the Baptist Union of Great Britain and Northern Ireland on May 27th 1861, a year after the first meetings. Samuel Hill and Charles French were elected the first deacons, two of a total of eighteen official members. Rev Alfred Tilly and Dr Thomas (of the Baptist College) preached at the event.

By September 1861 the church had grown enough to warrant a new venue; they moved to “the long room” of the Blacksmith Arms at a rent of 6/- per month. Another move was needed in December to a cottage in upper Maesycwmmer at a rent of 9/- per month.

Until 1868 the church had grown to 24 members and was pastored by students of the Baptist College, lay preachers and Mr. Capell, Blackwood. In July of that year, the first minister came, Rev William Morgan (pictured below), a former cobbler from Bassaleg. The financial situation of the church was poor but Rev Morgan graciously came though no salary was promised, only what could be afforded from weekly offerings.

On November 27th, a very unusual decision was made for a church which was a member of the Baptist Union; it was resolved in a meeting in Maesycwmmwr House to admit unbaptised persons to the Lords table provided they were in membership elsewhere.

In 1869 a building committee was formed to found a new building for the now 30 members and in on April 4th the following year, the foundation stone of the new building was laid. A bottle containing a sketch of the history of the Maesycwmmer Baptists, two handbills of public meetings and copies of Newspapers was deposited beneath the stone. The building’s architect was Mr Henry Thomas, Ystradgynlais. Builder Mr Davies Price, Swansea. It was 42’ by 28’ by 28’. It sat 250 people with the innovation of no pew rents. It cost £415 to erect. December 25th 1870 saw the new chapel opening services at 7am.

In September 1878 Llewelyn Jenkins, a crucial member of the church and instrumental in its beginning and maintenance died.

The church was without a pastor until the New Year 1898, when Mr Ambrose Lewis ATS (pictured below) was called from the Baptist College; he arrived on April 3rd 1898.

This pastorate intersected a 1904-5 Revival which transformed South Wales. The official membership increased by fifty and in January 1904 a new building committee was formed. The foundation stone was laid for the building which is the current building today on February 5th 1904. The new building cost £2310.15.11. It was 55’ by 40’ plus school 40’ by 25’6”, built to accommodate 600. Architect W R L Roberts, Abercarn; Builder William Yeo, Fleur-de-lis.

Unfortunately, the Revival drove a wedge between those of the congregation who were faithful and those who were simply religious. The faithful members left the Maesycwmmer church and started a new church in Hengoed called Tabernacle. This was a problem for Maesycwmmer as it would now be more difficult to pay for the new building. The theological differences can be highlighted by the very different sorts of men preaching for them and the fact that in 1906, Mount Pleasant Baptist was represented at the Joint Liberal Association. By 1907, some wounds were healed and Tabernacle wrote to Mount Pleasant,

“…that with a view to being reconciled to the Maesycwmmer church, we desire to express our regret for any error which we might have committed in (not by) seceding and that whilst in the interests of the denomination we are determined to carry on the cause which we have established, we pledge ourselves not to interfere with the members of the Maesycwmmer church who live at Hengoed – or seek to do anything which would militate against the success of that church.”

In March 1905, the Maesycwmmer church intended to ask Rev Lewis to resign on account of a lack of love and good feeling between him and the congregation. By the end of the month, the differences were resolved in a prayer meeting and the resignation was not asked for.

The opening services for the new and current building were held on February 5th 1905.

Below is a picture of the new building published in the Cardiff Times on February 10th 1906. 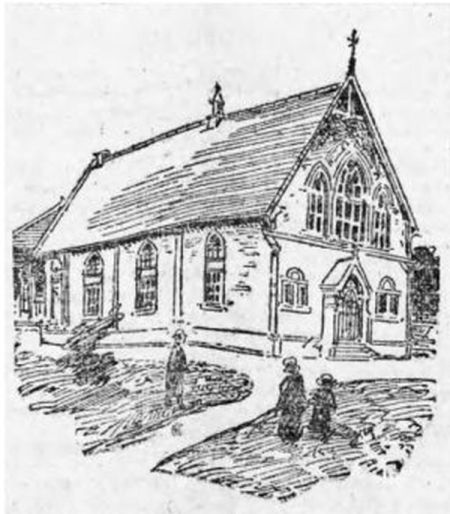 Rev Lewis resigned to accept a call to King St Baptist Church in Wigan on October 4th 1908 and preached his last sermon on November 29th.

It was not long before the next pastor was called, Rev Harry Edwards of Brymbo (pictured above left), Wrexham who was an analytical chemist before going into the ministry. By this time, the church was in a dire state financially. A combination of an ambitious building project, an associated loan from the Baptist Union and an exodus of the most faithful members meant that they could not support Rev Edwards. On December 1st 1912, he wrote a letter of resignation owing to the ‘financial difficulties of the church and lack of support from the congregation’.

Rev R A Jones (pictured above right) was called three years later from the Baptist College in Cardiff. He was the pastor until 1923 when he moved to pastor a church in Clapham, Grafton Sq, London. During his ministry, membership had more than doubled and financial contributions more than trebled. The church debt reduced from ~£1000 to ~£500.

Another short interim was ended when Rev Ernest V Tidman (pictured above) from Milford Haven was called from his previous pastorate in Mountain Ash on May 4th 1924. Over the next three years, official membership increased from 150 to 207. However, by 1932, it had dropped again to 170 owing to the inter-war trade depression. During the Tidman pastorate, Mrs Tidman began the Sisterhood, a social movement designed for the craft and sale of items to support the church. This sisterhood remained well into the late 1900s. Rev Tidman resigned to accept a call to Warminster in April 1932, the resignation was described as “almost imperative owing to the long and serious illness of Mrs. Tidman”.

Llangwm is a Baptist Union stronghold, one of the oldest churches of the Union. It was from here that Rev Alfred George Edwards (pictured below left) was called in November 4th 1934. During his ministry, there was building work done to expand, a heating system was installed and the Sunday School benefited from the addition of wartime evacuees. The evening service was also changed to 1530 owing to blackout restrictions. Rev Edwards remained until May 1942 when he moved to Tabernacle, Penarth.

Rev D Bernard Thomas (pictured above right) was called from Cardiff Baptist College in 1945 to continue after Rev Edwards but he only stayed for three years before moving to Llantwit Major Baptist.

After a wait of several years, in 1955, Rev Kenneth Barrell (pictured below left) of Cardiff Baptist College was called but he too only stayed for three years before he left the ministry and went into the teaching profession.

The church was without a pastor, supported by students until 1962. Rev Samuel Malcolm Jones (pictured above right) was called to the church. This is remembered as an unusual decision as Rev Jones was an evangelical. A lot changed under his ministry as he brought the church from its traditional liberalism back into the spiritual faithfulness in which it was founded. During Rev Jones’ pastorate, Mount Pleasant Baptist officially left the Baptist Union. Rev Jones continued until his retirement in 1998.

He was replaced by David George (pictured below) from Cwmbran who came from his previous pastorate in Gloucester.