The UK and Ireland Genealogical Information Service, GENUKI,
has received a number of reviews and awards since its inception. 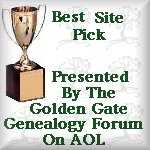 The Julian Bickersteth Memorial Medal was awarded by The Institute of Heraldic and Genealogical Studies to Brian Randell, Phil Stringer and GENUKI in 2001.

Best Site Pick for December 2000 - awarded by the Golden Gate Genealogy Forum on AOL. "The information and organization of 'GENUKI -- UK and Ireland Genealogy' shows the dedication and effort in providing easily accessible information to people searching their genealogy. On behalf of the Genealogy Forum on AOL, we would like to thank you for your time and effort in making the Internet a better place to do research".

Doras '3 Shamrock Award' "It is a very detailed site with a vast amount of information and links...." (December 1999).

Certificate of Appreciation awarded by the Society of Genealogists on 29th June 1999.

Family History Favorite Award from Ancestry.com - "One of the most comprehensive resources for UK/Irish research, these pages provide genealogy information, research suggestions, and valuable links to those performing family history research in England, Wales, Scotland, Ireland, the Channel Islands, the Isle of Man, and other islands." (March 1999).

GENUKI is a Pavilion at the Internet World Expo.

A review in Everton's Genealogical Helper, online edition in November 1995 was very complimentary.

We were nominated as as one of the top 8% of genealogy Web sites in the First Quarter, 1996.

A review by Bob Pearson of our WWW pages done in October 1995 as part of his degree course.

Winner of the Britain Express British Heritage Awards Best Heritage website for 2010. "Wow! What an amazing resource this genealogy website is. . . If you can't find it here, it probably doesn't exist."

Listed as one of the three Top free websites for family history research by Family Tree Magazine (U.K.) in May 2016. "GENUKI – is the UK and Ireland Genealogy gateway site – and is a massive online genealogy encyclopedia."

UKBMD - "The GENUKI site is the premiere site for research for UK genealogy", 30 April 2017.