In connection with the Works are the usual Engineering shops, namely, fitting, blacksmith, boilersmith, pattern maker, joiner, and other shops, where the necessary renewals and repairs to machinery and other plant are executed for the collieries, blast-furnaces, melting shops, forges, and rolling mills. It has been found, however, that the capacity of these shops is somewhat limited to meet the increasing demands of the Works, and new premises of a more commodious and modern character are contemplated.

This is situated at Crookhall, about a mile from the main Works, and has a capacity of 150 tons of castings per week. The foundry plant consists of three cupolas, air furnace, drying stoves, loam mill, and necessary blowing plant, with two steam jib cranes, one 25-ton overhead steam crane, and one hand power jib crane. The ingot moulds, and the whole of the castings necessary for mill and general iron work repairs, are made here. Connected with the place are pattern and blacksmiths' shops, and a brass foundry. Two egg-ended boilers drive the machinery. The overhead crane was made by Booth Brothers, and Thwaites Brothers, of Bradford, supplied the Roots patent blowers.

THESE are south-east of and about half-a-mile from the Iron and Steel Works, and have a capacity of about 120,000 bricks per week. Ordinary fire bricks, blastfurnace lumps, and other fire brick articles used in the various departments, are made here, the coal and clay being obtained at the Delves Pit, which is in close proximity. The clay is taken up incline gears by steam power, and tipped automatically into a large iron shoot provided for its reception. It is then conveyed along a horizontal shoot worked by an Archimedean screw to a large edge-runner mill, where it is ground. It next passes through perforated plates in the mill pan, after which it is elevated and screened, and finally passed to the pug mill. The driving engine, mill, and elevating gear are of great strength and power. There are ten brick burning kilns, equal to 17,000 or 18,000 bricks per charge. The kilns are fired by the waste heat from four rows of coke ovens immediately adjoining, the waste gases from which are collected in one large flue, and after passing through the kilns are conveyed in small flues under the floor of the commodious drying shed. There are also a small mill and press for mixing and making Banister bricks, which are burnt in two suitable hard fire kilns, each having a capacity of 10,000 bricks.

Steam is obtained from a Lancashire boiler also fired by the refuse heat from the coke ovens. The whole works, including coke ovens, cover an, area of fifteen or sixteen acres, and were designed by and erected under the superintendence of the late Mr. Jno. P. Roe. The building consists of mill house and drying shed, and there is room for extension if necessary. Two chimneys 150ft. high draw the heat through the kilns and under the drying flats.

Laboratory. - The Works possess a well equipped and convenient chemical laboratory, with necessary apparatus for the examination of materials received and produced in the operations connected with the various manufacturing processes.

Test-House. - This contains three Buckton's testing machines, one of 100 tons capacity, and two of 50 tons each, two tensile test preparing machines, two powerful bending machines, drilling machine, emery wheel, and all necessary appliances for carrying out the tests required by Lloyds, Bureau . Veritas, Board of Trade, Admiralty, and other surveys.

They have been built by various makers, namely, Black, Hawthorn, & Co., Gateshead; Robert Stephenson & Co., and Hawthorn, Leslie, & Co., Newcastle-on-Tyne; and John Harris, Darlington. The C class, four in number, are tank engines of a similar design to the B class, having outside cylinders 9-in. diameter by 16-in. stroke, and four coupled wheels 2-ft. 10-in. diameter.

The Dubs cranes are outside cylinder tank engines, on four coupled wheels, 3-ft. 6-in. diameter, the locomotive cylinders being 12-in. diameter by 22-in. stroke, and weigh about 36 tons. The D crane, equal to a load of two tons, built by Black, Hawthorn, & Co., was the first put to work here having the vertical type of boiler. The three D cranes built by Smith, of Rodley, are derrick cranes of the usual type, and capable of lifting a load of 30 cwt. at 30-ft. radius, or 60 cwt. at 15-ft. radius. The E cranes are the largest, and were designed and built specially for these works. Nos. 1 and 2 each lift 12 tons at a radius of 16-ft. Nos. 3 and 4 lift 7 tons each at a radius of 15-ft., while Nos. 5, 6, and 7 lift the same weight at a similar radius, but have longer jibs, which can be raised or lowered by a derrick motion till the radius is 20-ft., at which they lift 5 tons without being clamped down or otherwise supported. They all lift the weights on a single chain, and are very quick in the various motions. They have vertical boilers, with "Field" tubes, which are fixed on the tail of the jib, so as to act as a counterpoise to the weight lifted. E 1 and 2 are the largest, lifting easily and carrying the load of 12 tons. In working order they weigh (exclusive of the load lifted) about 55 tons. They were the first of the kind built, and were designed by the late Mr. J. P. Roe, the details being worked out under his supervision by the builders, Black, Hawthorn, & Co.

They consist of a bottom carriage forming the locomotive, with outside cylinders 131/2-in. diameter by 211/2-in. stroke, on three pairs of wheels, two pairs, 3-ft. 0-in. diameter, being coupled, and the front pair, 2-ft. 9-in. diameter, fitted with radial axle-boxes, to enable the engine to go round sharp curves. On the centre of this carriage is bolted the crane pillar, and spur rack and roller path on which the crane revolves. The lifting and revolving motions are worked by one pair of engines fixed on the jib sides. A powerful brake sustains the load at any point. The lifting, revolving, and travelling may be, and frequently are, carried on simultaneously. The .driver stands on the jib by the side of the boiler, where he can see the load he is lifting, and has full control of all motions without moving from his place. Steam is conveyed to and from the locomotive cylinders through the centre pillar, down which also passes the locomotive reversing and brake rods. E 3 and .4, built respectively by Black, Hawthorn, & Co., and Cowans, Sheldon, & Co., of Carlisle, are somewhat similar to Nos. 1 and 2, but smaller, lifting a load of 7 tons, and travelling with it suspended to the jib. The locomotive carriage is mounted on four coupled wheels, 3-ft. 0-in. diameter, and has cylinders 12-in. diameter by 211/2-in. stroke. The driver's platform .in these two cranes is underneath the jib, and extends the full width of the crane, giving him ample room. He may also work the crane from whichever side of the platform he finds most convenient, duplicate handles for all the various motions being placed at each side. In addition to the pair of engines on the sides of the jib for lifting, is another pair for working the revolving motion through worm gearing. No. 3 has also a chain drum on each side of the locomotive carriage, to be used for hauling purposes when necessary, and worked by a small pair of engines.

E 5, 6, and 7, built by Black, Hawthorn, & Co., are of similar size and capacity to Nos. 3 and 4, but have in addition a derrick motion worked from the lifting engine, for raising and lowering the jib, which is somewhat longer than on the other two cranes, and enables weights to be lifted at any radius between 15-ft. and 20-ft. Besides the motions enumerated, all the E cranes have a quick running shaft, driven by the lifting engines, which is attached to the tilting gear of the steel casting ladles when they need tilting up in the carriages. These large cranes are used almost exclusively in the steel melting shops. 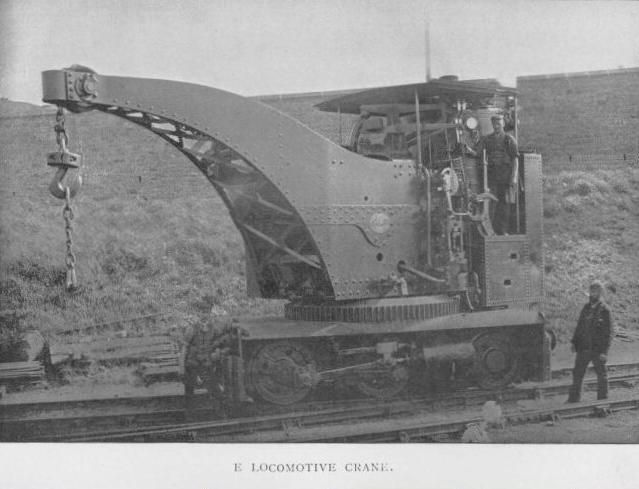 THE locomotive repairing shop is situated at Templetown, about a mile from the Works, on the main line between the Works and the collieries. It is 180-ft. long by 42-ft. wide, and contains store-house, smith's shop, with four fires and large furnace for heating tyres, &c., machine shop, fitting shop, with two lines of rails and pits, and foreman's office. The machinery is driven by a Tangye's horizontal engine, supplied with steam from a Cornish boiler, and consists of drilling, shaping, and screwing machines, slide and screw-cutting lathes, and a wheel and tyre turning lathe, wheel press, &c. In the fitting shop is about to be erected an overhead crane, to lift up to 25 tons.

EAST of the Works are the Wagon Shops, where all the chaldron. wagons and coal and coke trucks are built and repaired. Within this establishment is also the staff of workmen kept for repairing the cottage and other property belonging to the Company. The Company have also an Engineering Shop at Bradley, where all the necessary repairs are effected to the tubs,' engines, and machinery generally connected with the collieries.

Whilst the capabilities of the Consett Company as producers have gradually developed, there has been a proportionate extension of their cottage and other property in the district. They possess about 2,700 cottages at Consett, Blackhill, Leadgate, and the outlying districts, and employ upwards of 6,000 hands, the wages at present paid amounting to £8,000 per week, or £416,000 per annum. Besides having miles of railways of their own, they contribute to the North Eastern Railway Company in dues, the large sum of £150,000 annually. Their Infirmary, one of the most handsome buildings in Consett, contains sixteen beds, and is an inestimable boon to those who receive injuries in the works or mines. The educational needs of the workmen and their families have been also provided for, schools and reading rooms having been built at Consett, Blackhill, Leadgate, Allendale Cottages, and Langley Park. 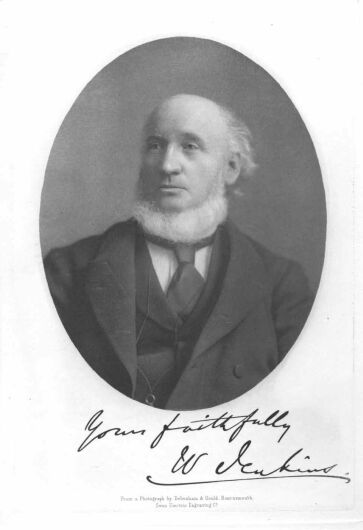 The foregoing is a brief sketch of the Consett Iron Works for the period of about half-a-century, from 1843 to 1893, and, as will be seen, the object has been to describe their origin, development, and present character.

The General Manager, MR. WILLIAM JENKINS, entered the service of the Company in October, 1869; and the heads of departments have grown, nearly the whole of them, with the place. They have all displayed great devotion, diligence, and skill, and to their co-operation with the General Manager largely is due the great transition which is observable in the increased volume of the operations of the Company during the past twenty-five years.

THESE were erected in 1884 from designs made by Mr. W. LISTER NEWCOMBE, F.S.A., of Newcastle. Having been found insufficient, a further extension is now being made.

The Company are represented by the following Agents at the places mentioned:

The illustrations in this little book are produced by the SWAN ELECTRIC ENGRAVING COMPANY. Mr. DALE'S portrait is reproduced from one taken by MESSRS. ELLIOTT AND FRY, London; while that of Mr. JENKINS is from a photograph by MESSRS. DEBENHAM AND GOULD, of Bournemouth.

The whole of the views were photographed by Mr. VENICE DUNN, of Consett.