"Perthshire, east-midland co. of Scotland, bounded N. by Inverness-shire and Aberdeenshire, E. by Forfarshire, SE. by Fife and Kinross-shire, S. by Clackmannanshire and Stirlingshire, SW. by Stirlingshire and Dumbartonshire, and W. by Argyllshire; greatest length, E. and W., 72 miles; greatest breadth, N. and S., 60 miles; the detached portion (lying along the upper reach of the Firth of Forth, and separated from the main body by a belt of Fife and Clackmannanshire) is 6½ miles by 4½ miles; area, 1,617,808 ac.; pop. 129,007.

Perthshire includes some of the grandest and most beautiful scenery in Scotland, combining features characteristic both of the Highlands and the Lowlands. The ranges of the Ochils and the Sidlaw Hills, which are parted by the estuary of the Tay, occupy the SE.; while the N. and NW. districts, to the extent of more than one-half of the entire county, are occupied with the mountains of the Grampian system, this Highland region being intersected by numerous lochs and glens."

From John Bartholomew's Gazetteer of the British Isles, 1887.

Perthshire (Siorrachd Pheairt), is a highland county located in central Scotland.  And, along with Kinross, Aberdeenshire, Angus, Inverness, Argyll and Bute, Moray, Stirling and Isle of Arran, is one of eight areas with the Highland Council’s administration. A local administrative county between 1890 and 1975,  Perthshire  extends from Strathmore in the east, to the Pass of Drumochter in the north, Rannoch Moor.

Please visit the Perthshire Clan & Families page for information about the Clan territories in Perthshire.

There are some with a narrower focus:

There has been a census every ten years since 1801, excluding 1941. The earliest for practical purposes is usually 1841 and the latest that is currently available is for 1911. Scottish census returns are held by the Registrar General.

Indexes and images for census records from 1841 to 1911 are available and searchable online at Scotland's People.

Registration of Births, Marriages and Deaths began in Scotland on 1st January 1855. Certificates are held by the Registrar General and can also be ordered through Scotland's People.

Sheriff Court Records for Perthshire fall under either Perth or Dunblane and are held by the National Archives of Scotland:

A variety of local court records are held by Perth & Kinross Archive.

Records of sasines, testaments, inventories etc. are held at the National Archives of Scotland. 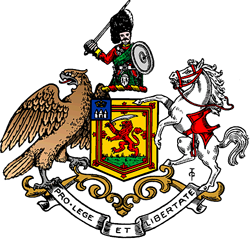 The coat of arms of the County of Perth appears to have been granted for use on the colours and standards of the volunteer and militia units of the county raised at the end of the eighteenth century. The Earl of Kinnoull, a native of Perthshire, and commanding officer of the Perthshire Gentlemen and Yeomanry Cavalry, was also Lord Lyon King of Arms at the time, and he presented the arms to the county in 1800. The grant document was discovered in the Lyon Office in 1890, and forwarded to the newly formed Perth County Council. Image courtesty of Wikipedia.

The shield is very similar to the Scottish royal arms, reflecting that Perthshire was the home county of the House of Dunkeld and contains the former royal capital, Scone. Further royal references are made on the canton, which shows Scone Palace surmounted by the Crown of Scotland. The crest is a Highland soldier, reflecting that the famous Black Watch were formed in the county. The supporters are an eagle and a warhorse, the former from the arms of the city of Perth.  (Wikipedia: https://en.wikipedia.org/wiki/Perthshire)

See Regalities and Baronies for more information about Perthshire's history of geographical boundaries.

According to the Family Search wiki page, there were three poorhouses in the Perthshire area.  There is a general page that has informationi about workhouses in the UK and that can be found here.