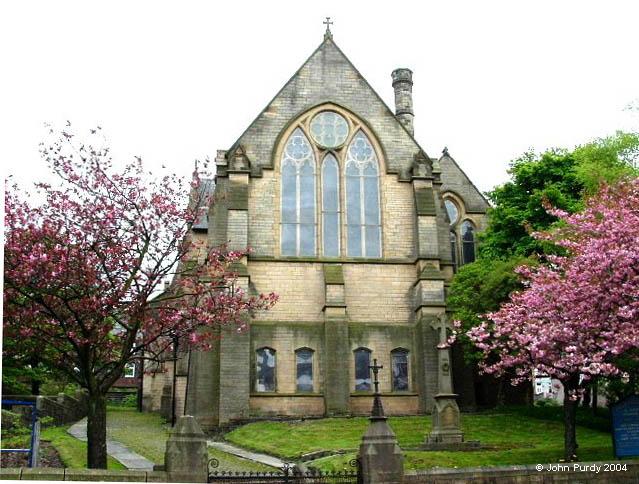 The Anglican Church of St. John the Evangelist on Burnley Road has been Bacup's Parish Church since 1837. The present building has something of an unusual floor, as it slopes markedly down from the back of the Church towards the alter. It opened for worship in 1883 and stands on the site of the original Church premises which partially collapsed in 1871 due to serious structural defects.

In fact the old building had been unsafe for many years before that, being described at the time as 'being in a most dilapidated condition and almost roofless'. Old photographs show strong timbers propping the walls! Occasionally referred to by earlier generations in a broad Lancashire dialect as 'Th'owd Parish Church' (The Old Parish Church), the original building was the first Anglican Church in Bacup and dated from 1788. By the time of its' collapse, there had been more than 7,000 burials in the Churchyard.

In a census of Church attendance on 22nd January 1887, four years after the new Church opened, 616 worshippers were recorded at St. John's.