HALTON, a village and a parish in Lancaster district, Lancashire. The village stands on the river Lune, and on the Lancaster and Leeds railway, 2½ miles NNE of Lancaster; and has a station on the railway, and a post office under Lancaster. The parish includes also the chapelry of Aughton. Acres, 3,738. Real property, £1,520. Pop., 670. Houses, 130. The property is much subdivided. Halton Hall is a chief residence. Coins of Canute, now in the British museum, were found, in 1815, on Halton moor; vestiges of a Roman camp and an ancient barrow are near the church; and remains of a Roman altar were found at the camp. The living is a rectory in the diocese of Manchester. Value, £479. Patron, J. Hastings, Esq. The church is modern, with an ancient tower; and has a memorial font. The p. curacy of Aughton is a separate benefice. An endowed school has £15; and other charities have £68.

Details about the census records, and indexes for Halton.

The Register Office covering the Halton area is Lancaster.

You can see pictures of Halton which are provided by:

"HALTON, a parish in the hundred of Lonsdale South of the Sands, county Lancaster, 3 miles N.E. of Lancaster. It is situated on the N. bank of the river Lune, and includes the chapelry of Aughton. The village is small, and the inhabitants chiefly engaged in agriculture. The tithes have been commuted for a rent-charge of £480. The living is a rectory in the diocese of Manchester, value £479. The church is ancient. The parochial charities consist of a bequest by Thomas Withers in 1747, for the purposes of education, now producing £15 per annum. R. F. Bradshaw, Esq., is lord of the manor, and chief landowner."

"AUGHTON, a chapelry in the parish of Halton, and hundred of Lonsdale, in the county palatine of Lancaster, 6 miles to the N.E. of Lancaster, its post town. It lies on the banks of the river Lune. The living is a perpetual curacy in the diocese of Manchester, value £140, in the patronage of the rector of Halton. There are some charitable endowments, the annual income of which is £18."

You can see the administrative areas in which Halton has been placed at times in the past. Select one to see a link to a map of that particular area. 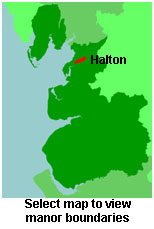 View maps of Halton and places within its boundaries.