"KIRKDALE, a township and a parochial-chapelry in Walton on the-Hill parish, Lancashire. The township lies on the river Merrsey, the Leeds and Liverpool canal, the Liverpool and Southport railway, and the Lancashire and Yorkshire railway, within Liverpool borough, 2 miles N of Liverpool exchange; and has a post office under Liverpool, and railway stations at Sandhills and Bootle Lane. Acres, 1,132; of which 430 are water. Real property, in 1860, £63,674. Pop. in 1851, 9,893; in 1861, 16,135. Houses, 2,542. The increase of pop. arose from participation in the prosperity of Liverpool. Much of the surface is disposed in streets, continuous with Liverpool, and containing many good modern houses; but a considerable proportion is still unedificed. The Huskisson and the Canada docks, and the North Fort battery are on the Mersey; the Regent road, the Bootle road, the Derby road, the Stanley road, and the Walton road are main thoroughfares, parallel with the Mersey, and outward from the town; and the county jail, the Liverpool industrial schools, the Kirkdale washhouse, and the Kirkdale pleasure and recreation grounds, are in the NE. The county jail stands on an elevated site; was built in 1818; had, in 1864, capacity for 472 male, and 120 female prisoners; and was greatly enlarged in 1864-5. The industrial schools were built in 1843-5, at a cost of £32,000; are in the Tudor style; have capacity for about 1,200 children; and are conducted at an annual cost about of £11,000. The K. recreation grounds are open to persons of all classes and all ages. The chapelry was constituted in 1844, and is less extensive than the township. Pop. in 1861, 14,730. Houses, 2,329. The living is a p. curacy in the diocese of Chester. Value, £300. Patrons, Trustees. A new church was about to be erected in 1866. The church was built in 1836, and enlarged in 1844. The North Shore national school is used as a chapel of ease. There are a United Presbyterian church, an Independent chapel, two Wesleyan chapels, a Welsh church, two national schools, an industrial ragged school and free church for the poor, built in 1862, at a cost of nearly £4,000, and a Roman Catholic institution, called the Sisters' Home. A cemetery, free to all denominations, is in Walton road."

Details about the census records, and indexes for Kirkdale.

The Register Office covering the Kirkdale area is Liverpool.

You can see pictures of Kirkdale which are provided by:

"KIRKDALE, a township in the parish of Walton-on-the-Hill, hundred of West Derby, county Lancaster, 2 miles N. by E. of Liverpool, of which borough it forms part. It is situated near the Leeds canal and the river Mersey. It has a station at Bootle-lane, on the Liverpool and Bury section of the Lancashire and Yorkshire railway. It forms a populous suburb of Liverpool, and contains the county gaol, sessions-house, and Liverpool Industrial Schools, which last were built in 1845, at the cost of £32,000, and educate about 1,200 pauper children, who are taught trades, &c., at an annual expense of above £10,000. In the play-ground is a model of a ship. The living is a perpetual curacy in the diocese of Chester, value £300. The church, dedicated to St. Mary, is a modern edifice. There are United Presbyterian and Independent chapels, also two National schools. There is a cemetery for all denominations at Walton-road."

"SANDHILLS, in the parish of Walton on the Hill, it is a station on the W. section of the Lancashire and Yorkshire railway, the first after leaving Liverpool."

In 1835 Kirkdale was a township in the parish of Walton on the Hill.

You can see the administrative areas in which Kirkdale has been placed at times in the past. Select one to see a link to a map of that particular area. 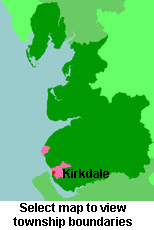 View maps of Kirkdale and places within its boundaries.