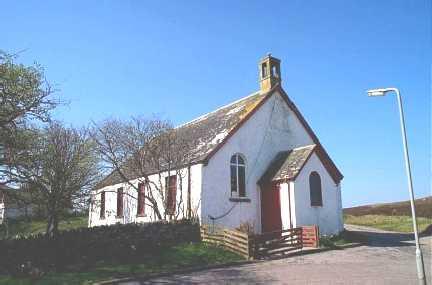 Little information is available on the current church.

The remains of the former parish church are at Balnakeil (OS NC3911068660), which was built in 1619 and had an aisle added to the N in 1692. It was in use until about 1814 when the present church was built. Although somewhat irregular in plan, it is generally typical of its period with a belfry on the E gable. The remains stand to the wall-head, the crow-stepped gables being intact. The earliest reference occurs between 1223 and 1245 when it was assigned to find light and incense for the cathedral church, but it is said to have been a Celtic foundation of St Maelrubba. An old font known as the 'Clach na sagart ruadh' or 'stone of the red priest', lay in front of the door of Balnakiel House before 1867 but by 1874 it had been moved to within the church. The church is said to occupy 'the site of a cell of Dornoch monastery', but there is no mention of such by Easson.

It is now a ruin. Its irregular plan is similar to others of the period.. It is largely an off-centred T-plan, and the pulpit was placed in the middle of the long side wall, facing the wing or bottom of the 'T'. The gables are crow-stepped and one has a belfry on top. A lintel in the doorway has an inscription '16. HMK. A'. There are various simple, rectangular windows in the structure. The roof is completely gone. All the walls and gables are (or were) fully intact at the last visit, but this may now be not the case.

For further information see The Past and Present of Durness.