Details about the census records, and indexes for Cheetham.

The Register Office covering the Cheetham area is Manchester.

You can see pictures of Cheetham which are provided by:

"CHEETHAM, a chapelry in the parish and borough of Manchester, in the county of Lancaster. It is situated to the N. of Manchester, but may be said to commence in Manchester itself. The living is a rectory in the diocese of Manchester, in the patronage of the Dean and Chapter. The church is dedicated to St. Mark, and was, before the Reetorial Bill passed, simply a chapel of ease. There is another church, dedicated to St. Luke; the living is also a rectory, value £258, in the patronage of the trustees. Here the Wesleyans and Independents have places of worship. In Edward III.'s time this was the estate of Sir George Cheetham, and is described as a "little village to the N. of Manchester, which gave its name to the family of Cheetham." Smedley Old Hall, which is situated in this chapelry, formerly belonged to the Cheethams. Of this family was Humphrey Cheetham, who is included by Fuller among his "Worthies of England." He was high sheriff of the county of Lancaster A.D. 1635, "discharging that office," says Fuller, "with so great honour, that very good gentlemen of birth and estate wear his cloth at the assize, to testify their unfeigned affection to him." Having amassed a large property by the cotton trade, he left a handsome endowment for the education of 40 boys, to be selected from the neighbouring towns, and also funds for the foundation of the fine library and college which now adorn Manchester. He further bequeathed £200 to purchase "godly English books," to be chained upon desks in the churches of Manchester and Bolton, and the chapels of Turton, Walmsley, and Gorton. His will is dated 16th December, 1651, and his trustees were made a body corporate by charter of Charles II."

"RED BANK, an ecclesiastical district in the parish and borough of Manchester, county Lancaster. The living is a rectory in the diocese of Manchester, value £190, in the patronage of the bishop. The church is a modern structure dedicated to St. Thomas."

In 1835 Cheetham was a township in the parish of Manchester.

You can see the administrative areas in which Cheetham has been placed at times in the past. Select one to see a link to a map of that particular area. 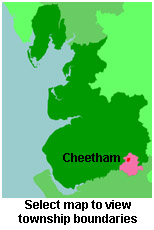 View maps of Cheetham and places within its boundaries.