"MANCHESTER, a city, a township, a district, a parish, and a diocese in Lancashire. The city stands at an intersection of Roman roads, on the rivers Irwell, Irk, and Medlock, at the termini of varions canals, and at a convergence of railways, 31 miles W by N of Liverpool, 85 NNW of Birmingham, and 188¼ NW of London. Railways go from it, in all directions, to all parts of the kingdom; canals give it water communication with the eastern and the western seas, and with most parts of England; and conveyances, of all suitable kinds, connect it with places not touched by railway or canal."
More ...

Manchester Cemeteries and Crematoria. Transcripts of Gravestones are often in the archives at Manchester Central Library.

The following have been transcribed but are waiting to be bound

Details about the census records, and indexes for Manchester.

The Register Office covering the Manchester area is Manchester.

You can see pictures of Manchester which are provided by:

"OLDFIELD ROAD, a station on the western section of the Lancashire and Yorkshire railway. It is the first station after leaving Manchester."

Manchester used to be in the county of Lancashire until 1974 when it became part of the new county of Greater Manchester which is divided into 10 metropolitan boroughs. These are Bolton, Bury, Manchester, Oldham, Rochdale, Salford, Stockport, Tameside, Trafford, and Wigan. The total population is over 2.5 million.

Each Metropolitan Borough comprises a big town together with the surrounding smaller towns, villages and countryside. Most of the names are self explanatory. For example the metropolitan borough of Stockport includes the towns of Stockport, Cheadle, Gatley, Bramhall, Hazel Grove, Marple, Romiley, Bredbury, etc.

The names of two of the metropolitan boroughs are not obvious. A neutral name was chosen because, at the time they were created, there was no agreement on the town to be put forward as the centre. However, Tameside is based on Ashton-under-Lyne, and Trafford is centred on Stretford.

You can see the administrative areas in which Manchester has been placed at times in the past. Select one to see a link to a map of that particular area.

A description of the city of Manchester in 1865 taken from Slater's Directory, gives an interesting view of what it was like in Victorian times.

A description of Manchester in times past. 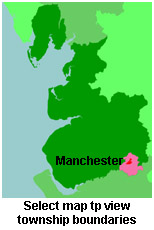 View maps of Manchester and places within its boundaries.

A brief history of the Manchester Regiment.

The Workhouse site has an interesting description of Manchester workhouse.