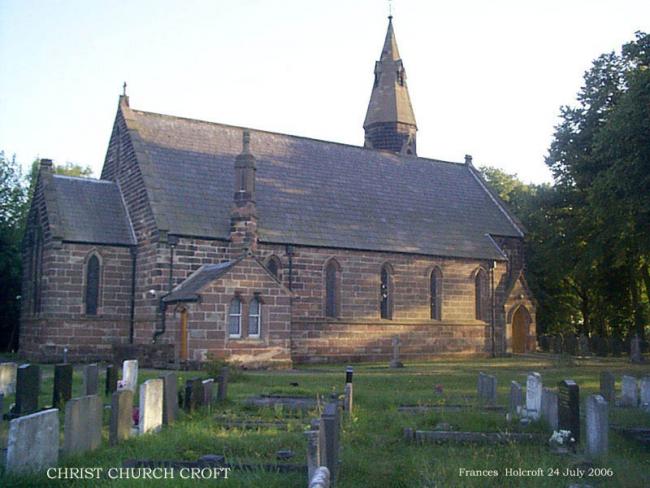 Built as a chapel of ease to the Mother Church of Winwick in 1832-1833, Christ Church Croft occupies a prominent position in what is probably one of the highest parts of the village. The Church is of Gothic design with a spire designed by one of the foremost architects of the day, E. Blore, Esq., and built by James Pierpoint at a cost of £2667.00, of which the Parliamentary grant provided £1457, the remainder being raised locally. Mr. Samuel Barrow gave the land for the Church & Churchyard; the Church was consecrated by the Bishop of Chester (in whose diocese Croft then was) on 29th November 1833. The present site was chosen as being a mid-point between Croft and Risley who's two communities it was built to serve. The sandstone for the building was transported by the Croft farming community from Delph Lane.

In the Churchyard by the North gate stand two stone pillars which were once the sides of the Croft stocks.

Croft was separated from Winwick as a parish in the year 1845, then having a rateable value of £276. The seating capacity was 518, made up of 226 in paid pews and 292 free. In 1904 the old high-backed pews on the North and the South sides of the Church were replaced by the present Oak pews. The stone flagged floor was also replaced by the present wood block one. A new heating apparatus with pipes and radiators round the walls was introduced at the same time; this was replaced in 1957 by off-peak electrical system. In the year 1999-2000, when the Church was totally refurbished a new oil fired heating system was installed.

Mayhr & Co of Munich made the East window. It is a three light window, representing the Good Shepherd with St. Peter & St. Paul on the left and the right. The family of the Rev. T. P. Kirkman gave the central light in his memory; the other two flanking windows were given by the friends and parishioners of Croft in memory of the Rev. T.P. Kirkman & Mrs. Kirkman. The windows on the North & South side of the Chancel, representing St. John & St. James were given by Mrs. P. Ingham in memory of her parents. Messer's Shrigley & Hunt of Lancaster made the remaining windows. The central light at the West end which depicts St. Cecilia was given by the parishioners of Croft in memory of Mr. T. Hurdus, who died in 1948 having been the organist for 44 years. Mr. & Mrs. Peter Ingham gave the two flanking Angels respectively. Below the gallery at the West end is a window by Shrigley & Hunt of Lancaster, given by the Sunday school children in 1954.The first window on the North side depicting Christ with the children of the world commemorates the service of Mr. & Mrs. Ingham to missionary work and also to the fact that Mr. Ingham served as a Churchwarden & Sides man for 50 years, both were Sunday school teachers. The second window on the North side commemorates Mr. C. S. Smith of Heath House, Croft for many years a worshiper in the Church. The South window is in memory of Mr. and Mrs. A Stout who had been members of the Church for over 40 years.

The plaque on the North wall commemorates the use of the Church by H.M.S Gosling during the Second World War. British Coal presented the plaque on the South wall to the Church when they vacated their offices at Anderton House (a former H.M.S Gosling camp). The Royal Navy gave a Chalice & Paten to the Parish when the camps closed. The framed picture on the North wall was given by the executors of Miss. M. Marsh of Peak House, Croft in her memory. On the South wall a war memorial tablet records the names of twenty men from the Parish who died in the First World War and three who died in the Second. The Eagle Lectern was given by the family of Drummer Edgar Clough killed in action in Mesopotamia on the 8th March 1916. The Reredos in coloured marble and Caen stone together with the oak panelling on the East wall of the Chancel were given by the Rev. H. I. Wadeson in memory of his wife, whilst the panelling on the North and South walls of the Chancel were given by the parishioners in memory of Mrs. Wadeson. The Communion Table, chairs and pulpit handrail were the Parish's memorial to the Rev. H. I. Wadeson. The marble steps in the Chancel were the Parish's memorial to the Rev. S. Barrow who's daughter gave the Altar Cross in memory of Mr. & Mrs. Cawthorne, Mr. Cawthorne was the Schoolmaster in Croft from 1891-1917. The Font cover at the West end of the Church was given by the soldiers of the Parish as a Thanksgiving of their safe return from the First World War. The book of remembrance which is also at the West end of the Church records the names of those whose ashes have been interred in the Garden of Remembrance was given by Mrs. P. Hopley in memory of her husband Alfred Thomas Hopley who had been a Sides man and P.P.C. Secretary for many years The oak shelf and book rest on which the Book of Remembrance stands were given by Mrs. Moore in memory of her late husband, Thomas Moore who was Rectors Warden 1950-1960.

The Litany desk was given by Miss. Withington in memory of her late father Captain E. Withington J.P of Culcheth Hall who worshiped here for many years.

The brass tablet on the organ commemorates the life of Mr. C. H. Ingham who was the organist at Croft Church for many years.

The Church spire was overhauled in July 1910, the decayed stonework being renewed, the cracks made good with mastic cement down to the square, total for the same being £25 which included making safe the lightning conductor.

Mr. Silas Clough provided a notice board fixed near the North door of the Church to replace the old one.

In the years 1962-1963 a much needed general restoration of the exterior fabric of the Church was undertaken. New drains were inserted at the base of the foundations of the North wall to try to eliminate the constant dampness. The interior walls were re-plastered where necessary and the whole interior of the Church re-decorated. The lighting system was tested and where necessary renewed. The total cost of this work was £3750.

The first Curate at Christ Church Croft was Benjamin Banning whose Curacy lasted from 1833 to 1838. He left Croft to become Curate at St. John's Liverpool staying until 1841. He was appointed Vicar of Wellington, Salop in 1841 and he remained in that post until 1881.

Thomas Penyngton Kirkman a distinguished mathematician and a Fellow of the Royal Society was Curate from 1839 until 1844, when he became the first Rector of Croft he held that position until 1892 when Henry Isaac Wadeson took over, during his Incumbency of 41 years every part of the Church with the exception of the stone walls was renewed, much of the beautiful decoration of the Church and Organ was the work of his own hands. In his early days Mr. Wadeson took an active interest in sport; walking, wrestling and boxing being amongst his accomplishments. He was fond of cycling and a great lover of nature particularly birdlife. An eloquent and gifted speaker, he was much in demand for Harvest Festivals in neighbouring villages and towns. He was of powerful build and until a few days before his death on 17th March 1933 enjoyed robust health. Mr. Wadeson is buried in the Churchyard.

From 1933 the Rector was Samuel Barrow; during his short time as Rector he devoted much of his energy into raising a memorial to his predecessor. He was an Evangelical Churchman of considerable musical ability and in keeping with the traditions of the Church ensured his services were as bright and beautiful as possible. He died on the 4th of January 1936 and is buried in the Churchyard.

From 1936 the Rector was William Chadwick, during his incumbency the Abdication crisis of 1936 and the Coronation celebrations of the following year took place. He was Rector for most of the Second World War and as such saw many of his congregation leave for active service. He resigned in 1944 and moved to London joining his son who was Vicar of Crouch End.

From 1944 the Rector was Herbert Alexander Carlyle Hughes L.LB. During his 26 years as Rector saw the former Memorial Institute replaced by the present Memorial Hall playing an active part in bringing this about. He was appointed Rural Dean of Warrington in 1957, he held this position until his death on the 4th June 1970 and he was buried with his wife in the Churchyard of All Saints Rainford.

John Alexander Woolley was the Rector from 1971 until 1975 when he resigned to become the Chaplain of Ryhope Hospitals in Sunderland.

John Taylor became the Rector in 1975 and remained until his death on the 12th September 1978. He his buried in the Churchyard at Christ Church Croft.

From 1979 the Rector was Richard H.L. Williams who remained as Rector until his move to Wavertree, Liverpool in 1989.

Peter Thorn became the Priest-in-charge in 1990 until 1992 when he left to take up a position in the South of England.

On the 6th July 2003 the Rev. Dr. Christopher Stafford was appointed as Rector, he was formerly Curate of St. Philip's, Westbrook who had studied at University at the age of 18 to obtain a degree in plant biology going on to obtain a PhD in Cell biology. In 1991 he spent a year with Birmingham City Mission working with homeless people, later working with the victim support department at Birmingham Crown Court, Afterwards studying for Ordination to the Priesthood and was ordained Priest in Liverpool Cathedral on 18th June 2000, becoming Curate of St. Philip's, Westbrook until his appointment to the joint Benefice of Newchurch and Christ Church Croft.

NB: The above history of the Church was written by Mr. Peter Ingham in 1934. Mr Ingham was a Churchwarden for some 50 years and was the father of Mr. Clifford Ingham, one time organist at the church; his brother was Mr. Ralph Ingham who was my grandfather