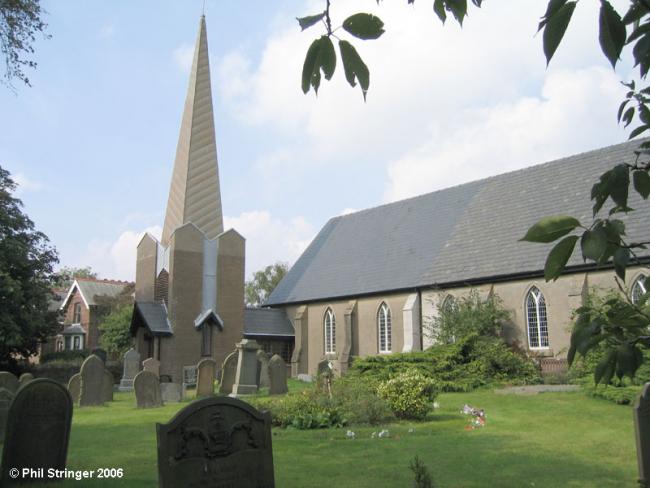 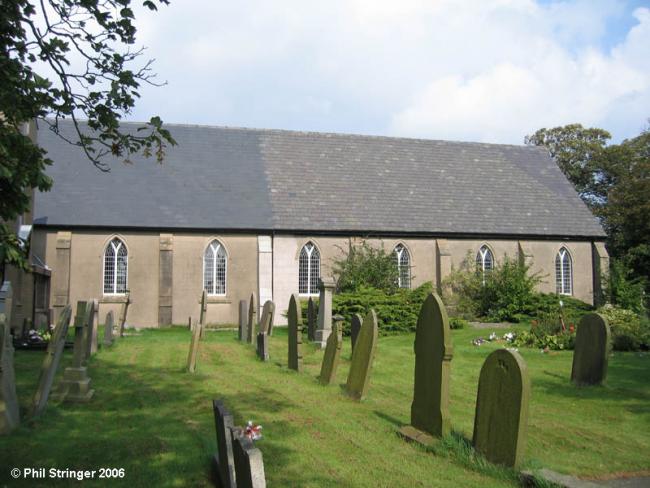 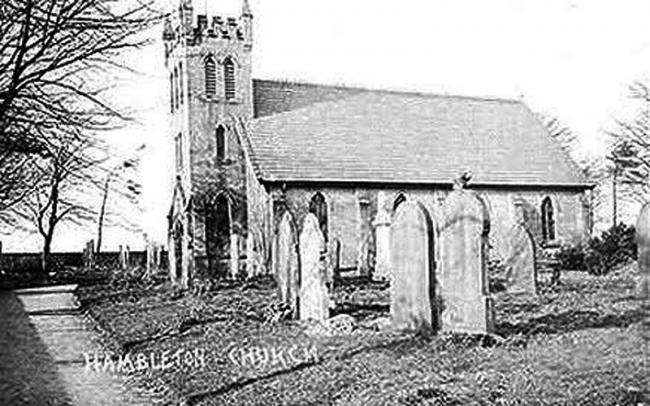 It was founded before 1577. For details of the current church see their website.

The site of the church is thought to be that of the manor of the Sherbourne family. At one time the area was protected by a moat around the manor within which was an oratory chapel dedicated to St. Mary a licence being obtained by Robert Sherbourne in 1456.

In 1530 George Allen of Rossall, the grandfather of Cardinal Allan bequeathed the sum of X11s (12 shillings = 60 p) to the chapel.

It was in 1567 that the inhabitants of Hambleton petitioned Queen Elizabeth that their chapel commonly called Our Ladie Chapell, might be consecrated for divine service and administration of the sacraments by fit chaplains or curates, approved by the vicar of Kirkham, and for the burial of the bodies of the dead.

The chapel was licensed for burials and administration of the sacraments in 1567. The Bishop of Chester gave licence accordingly, ordering that the chapel wardens should take his permission once every three years to the parish church, where it was to be read through after the Gospel on Whit Monday.

In 1650 the Parliamentary Commissioners reported:- There is no allowance to the minister, but only £5 per annum paid by Richard Sherbourne, Esquire, Lord of the Manor, and £40 per annum by order from the committee for plundered ministers.

In 1717 the chapel was served by a curate who preached and read prayers every Sunday, sacrament days excepted. The ancient endowment was £5 per year paid by the Lord of the manor out the profits from a windmill. Later this was increased by other gifts. The windmill grant is mentioned in the time of James 1, the amount indicating a pre-Reformation endowment.

The church was rebuilt in 1749, the nave of which still stands. The building was simple in construction of clay brick faced externally with sand and cement. The internal walls were lime-washed. A gallery spanned the west wall and access to the church was gained by two doors on the south side of the church.

In 1877 extensive alterations were made, The roof was literally raised to take the strain from the side walls and buttresses fitted to give extra strength. The old vestry at the west end was replaced by a new one on the north side and the gallery removed. A turreted tower was erected at the west end of the nave through which the congregation entered, the doors in the south wall being bricked up.

(A water colour painting, near the current vestry door, by Mrs Marjorie Constantine appears to show the Church following these alterations).

This building was enlarged in 1973 following a generous bequest from Mrs Woodhouse . The tower and west wall being demolished to allow the nave to be enlarged to nearly twice its original length. A new bell, tower and, steeple were erected to compliment the features of the old church. The seating was re-arranged to provide a central aisle and the vestry accommodation increased.

In 2009 the church was re-ordered to provide disabled access and a new hearing loop, a multi-use space was created at the back of the church including kitchen facilities, the font was relocated to the front of the church near to the pulpit, and the heating system was updated. The cost of this was met by the Diocese from the sale of redundant vicarages.

An interesting feature among the old grave-stones is one on the north-east corner of the wall outside the church. It is one William, son of James Norris of Liverpool buried in 1692 His epitaph reads:-

Though Boreas Blast and Neptune's Waves,
Have tossed me to and fro,
Yet a spite on both, by God's decree
I Harbour here below:
Here at anchor doe I ride with many of our Fleet,
Yet once again I must sett sail,
My Generall Christ to meet.

The person in question is reputed to be a sailor washed up in the River Wyre. It is also interesting to note that the Norris family of Speke Hall near Liverpool were prominent at the time.