You can see pictures of Liverpool which are provided by:

"MILLER'S BRIDGE, a station on the W. section of the Lancashire and Yorkshire railway, near Liverpool." 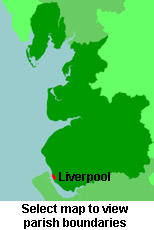