LYTHAM, a small town, a parish, and a sub-district, in Fylde district, Lancashire. The town stands on the N shore of the Ribble estuary, at the meeting-point of two branch railways from respectively the Preston and Wyre railway and the town of Blackpool, 8 miles SSE of Blackpool, and 12 W of Preston; is a sub-port to Preston, a watering-place, and a seat of petty sessions; presents a new, neat, and clean appearance; enjoys fine amenities of beach, environs, and climate; has undergone many improvements by a board of commissioners under a local act; and has a post office under Preston, a railway station with telegraph, a neat market-house of 1848, a county constabulary station, assembly-rooms, public baths, billiard-rooms, several first-class hotels, a number of respectable lodging-houses, two churches, three dissenting chapels, a Roman Catholic chapel, two endowed schools, two national schools, several good private and boarding schools, a long marine parade, and a long steamboat pier. St. Cuthbert's or the parochial church was rebuilt in 1834; is a neat structure of red brick; consists of nave, aisles, and chancel, with porch and tower; and contains monuments of the Clifton family. St. John's church stands on the E beach; was built in 1850; and is a stone edifice in the early English style. The Independent chapel stands in Westby-street, and is a handsome recent structure. The marine parade was formed by levelling the beach; is 2 miles long; and commands a fine view across the estuary. The pier was constructed in 1865; is 914 feet long; and, besides serving for steamboats from Blackpool, Southport, and other places, forms a splendid promenade. The branch railway from the Preston and Wyre line was opened in 1846; and that from Blackpool was opened in 1863. Lytham Pool, about a mile E of the town, serves as an entrepôt to Preston; accommodates large vessels for the discharging of their cargoes into smaller crafts; and has a graving dock for building and repairing vessels. A custom-house is on the E beach; and a lifeboat station is near. The parish comprises 5,177 acres of land, and 10,365 of water or foreshore. Real property, £15,425; of which £135 are in gas-works. Pop in 1851, 2,698; in 1861, 3,194. Houses, 552. The increase of pop. arose mainly from the attractions of the town as a watering-place. The manor, with Lytham Hall, belongs to Col. John Talbot Clifton. The hall stands on the NW side of the town; was erected between 1757 and 1764: and is a spacious mansion. A Benedictine priory, a cell to Durham abbey, was founded on or near the site of the Hall, in the time of Richard I., by Roger Fitz-Roger; and some remains of it are included in the Hall. A portion of the parish which had a pop. of 1,579 in 1861 was constituted a separate charge, under the name of L. St. John, in 1851. The head living is a vicarage, that of St. John a p. curacy, in the dio. of Chester. Value of the head living, £131: * of St. John, £60.* Patron of both, Col. J. T. Clifton. The sub-district contains also the Poulton-le-Fylde hamlet of Little Marton. Pop., 3,627. Houses, 620.

Lytham Heritage holds a substantial archive of heritage information and is open Weds afternoons only. The library service is being moved to a small room in Lytham Assembly rooms and will hold no local studies information.

The following books contain useful information about the history of Lytham and the surrounding area.

Details about the census records, and indexes for Lytham.

The Register Office covering the Lytham area is Blackpool & Fylde.

You can see pictures of Lytham which are provided by:

LYTHAM, a parish in the hundred of AMOUNDERNESS, county palatine of LANCASTER, 6 miles (S.W. by W.) from Kirkham, containing 1292 inhabitants. The living is a perpetual curacy, in the archdeaconry of Richmond, and diocese of Chester, endowed with £800 and a rent-charge of £7 private benefaction, £600 royal bounty, and £600 parliamentary grant, and in the patronage of John Clifton, Esq. The church is dedicated to St. Cuthbert. There is a Roman Catholic chapel. A free school was established in 1704, with the produce of various benefactions, which, with others of a later date, yield an income of £104. 18. per annum; the number of scholars varies from seventy to one hundred and twenty. A Sunday school affords instruction to about one hundred children. Lytham is situated on the western coast, on the northern shore of the estuary of the Ribble, and is much resorted to for sea-bathing. Some improvement has taken place within the last few years, by pulling down an extensive range of old buildings, and, after leaving an opening from the Clifton's Arms hotel to the beach, erecting several new houses, among which is a billiard-room. Part of the beach has also been levelled, and a public walk formed along it, affording a pleasing view of the scenery on the southern side of the estuary. About a mile eastward is Lytham pool, a large natural basin, where vessels bringing corn, &c., to the port of Preston, discharge their cargoes into smaller craft; at its northern extremity is a graving dock, for building or repairing vessels. A few of the inhabitants are employed in fishing. Lytham Hall comprises, in its kitchens and out-offices, a portion of the buildings of a Benedictine priory, founded, as a cell to the monastery at Durham, by Richard Fitz-Roger, in the latter part of the reign of Richard I., and dissolved, with the smaller monasteries, by Henry VIII.

"LYTHAM, a parish in the hundred of Amounderness, county palatine of Lancaster, 6 miles S.W. of Kirkham, 8 N. of Southport, and 14 W. of Preston, its post town. It is situated on the N. bank of the estuary of the river Ribble, and is the terminus of a branch line of the West Lancashire and Yorkshire railway. The village is mostly modern, and has some good houses. It is well lighted with gas, and possesses every accommodation for the comfort of its numerous visitors, the place being much resorted to in the summer months for its salubrity and facilities for sea-bathing. About a mile to the E. is Lytham Pool, a large natural basin, where ships transfer their merchandise to lighter vessels, to be conveyed up the river to the port of Preston. At the northern extremity of the basin is a graving-dock for building and repairing vessels. Many of the people are engaged in the fisheries. The National Life Boat Institution has a station in the vicinity. A portion of the beach has been levelled, and a public promenade formed along it, affording a view of the scenery on the S. side of the estuary. The tithes have been commuted for a rent-charge of £568. The living is a perpetual curacy in the diocese of Manchester, value £131. The parish church is a neat edifice of red brick, with a tower, dedicated to St. Cuthbert. There is also the district church of St. John, the living of which is a perpetual curacy, value £60. The church of St. John is a modern structure. The charities, including the endowment of the free school, produce about £110 per annum. The Baptists, Wesleyan Methodists, and Roman Catholics have places of worship; and, in addition to the free school, there is a good National school, and one belonging to the Roman Catholics. Here are some remains of a priory, founded about the 12th century. Lytham Hall is the principal residence. Colonel Clifton is lord of the manor. Saturday is the principal market day."

"SALT, a cove in the estuary of the river Ribble, county Lancaster, 5 miles S.W. of Kirkham."

"STANNER POINT, a headland on the N. side and at the mouth of the river Ribble, county Lancaster."

Lytham, town and par. with ry. sta., N. Lancashire, on estuary of the Ribble, 7 miles SE. of Blackpool and 14 miles W. of Preston - par. (containing the greater part of St Annes on Sea), 5310 ac. and 9872 foreshore, pop. 5268; town, pop. 4122; P.O., T.O., 3 Banks, 1 newspaper. Lytham is situated on the N. shore of the estuary of the Ribble, and is a great resort during the spring and summer months. The pier (1864) is 900 ft. long, and there is a splendid beach, also a promenade and marine drive. About a mile to the E. is Lytham Pool, an anchorage of vessels for the port of Preston. The trade of the town is connected with the supply required by visitors.

In the Domesday book the name of the town and parish appears as Lidun, and by the time of King John it then appears as Lethum. The name is now Lytham.

There are now there distinct areas lying within the original Lytham parish, Lytham, St.Annes-on-Sea and Ansdell & Fairhaven. St.Annes is a relatively new town built for the then new fashion of seaside holidays in the western part of the parish. The first stone was in fact formally laid by the squire of Lytham, John Talbot Clifton on 31 March 1875. Ansdell & Fairhaven lies between Lytham and St.Annes.

Details of the administrative areas of which Lytham has been a part can be seen in a Vision of Britain, which contains details of historic boundaries, and more about the place.

You can see the administrative areas in which Lytham has been placed at times in the past. Select one to see a link to a map of that particular area. 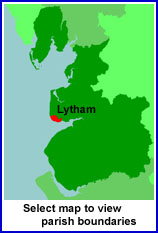 View maps of Lytham and places within its boundaries.

Lytham was in the Fylde Poor Law Union.

The records of King Edward VII and Queen Mary schools are held in the AKS Archives. You can browse the archive catalogue to see what is held.