KELLET (OVER), a township-chapelry in Bolton-le-Sands parish, Lancashire; on the Lancaster and Kendal canal, 1½ mile E of Carnforth r. station, and 6½ NNE of Lancaster. It contains the hamlet of Capernwray; and its post town is Burton, Westmoreland. Acres, 3,202. Real property, £3,886; of which £21 are in quarries. Pop., 425. Houses, 89. Capernwray Hall is the seat of G. Marton, Esq. The living is a vicarage in the diocese of Manchester. Value, £240.* Patron, Septimus Booker, Esq. The church is early English, has an embattled tower, and was recently restored. A chapel is near Capernwray Hall, and is served by a curate appointed by the vicar. There are a grammar school with £46 a year from endowment, and other charities with £15.

Details about the census records, and indexes for Over Kellett.

The Register Office covering the Over Kellett area is Lancaster.

Information about Over Kellet village.

You can see pictures of Over Kellet which are provided by:

"OVER KELLET, a chapelry in the parish of Bolton le Moors, hundred of Lonsdale South of the Sands, county Lancaster, 1½ mile from the Carnforth railway station, and 6 N.E. of Lancaster. It is situated on the Lancaster canal, and contains the hamlet of Capermhay. There is abundance of good limestone and freestone, which are extensively quarried for building purposes; also grit, which is raised for millstones. The living is a vicarage in the diocese of Manchester, value £230. The church, dedicated to St. Cuthbert, is an ancient stone structure containing three bells. A proprietary chapel was also built here by George Manton, Esq. The charities produce £61 per annum, of which £46 is the endowment of the village school.

"CRICKLAND, a hamlet in the county of Lancaster, 3½ miles S. of Burton-in-Kendal. It is situated near the Lancaster canal and railway."

"CAPERNWRAY, a hamlet in the chapelry of Over Kellet, and parish of Bolton-le-Sands, hundred of Lonsdale, in the county palatine of Lancaster, 3 miles to the S. of Burton-in-Kendal."

In 1835 Over Kellett was a township in the parish of Bolton le Sands.

You can see the administrative areas in which Over Kellet has been placed at times in the past. Select one to see a link to a map of that particular area. 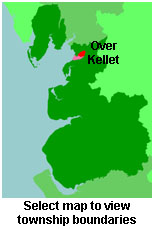