Details about the census records, and indexes for Skelmersdale.

The Register Office covering the Skelmersdale area is West Lancashire.

"SKELMERSDALE, a chapelry in the parish of Ormskirk, hundred of West Derby, county Lancaster, 4½ miles S.E. of Ormskirk, its post town, and 3 N.W. of Pimbo-lane railway station. The village is chiefly agricultural. Many of the inhabitants are engaged in the collieries and stone quarries. The living is a perpetual curacy in the diocese of Chester, value £142, in the patronage of the Vicar of Ormskirk. The church, dedicated to St. Paul, has a tower and bell. It was built about the year 1776, and enlarged in 1823. In the interior is a painted E. window, and some monuments to the Skelmersdale family. The parochial charities produce about £79 per annum, of which £51 goes to Swift's school. The Wesleyans have two places of worship. This place gives title of baron to the Wilbrahams of Lathom, to whom the manor belongs."

In 1835 Skelmersdale was a township in the parish of Ormskirk.

You can see the administrative areas in which Skelmersdale has been placed at times in the past. Select one to see a link to a map of that particular area. 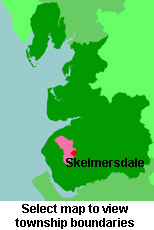 View maps of Skelmersdale and places within its boundaries.

A map of Skelmersdale around 1845.