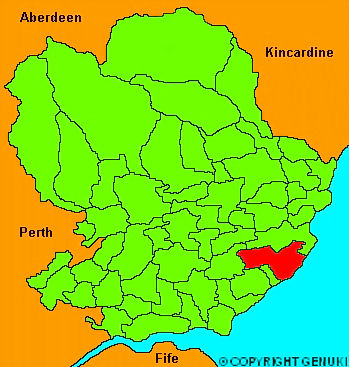 "St Vigeans, a village and a coast parish of Forfarshire.  The village, though small, is ancient; and is said to  derive its name either from a hermit and confessor who  died at Grange of Conon in the neighbourhood about  the year 1012, or from the Irish ecclesiastic Fechin,  abbot of Fobhar, who died in 664. It stands on the  Brothock, 1¼ mile N of Arbroath.

The parish of St Vigeans, one of the oldest in the  country, consisted formerly of a main body and two  detached portions. The smaller of these detached por tions, that situated at Hospitalfield and comprising  133 acres, was transferred by the Boundary Commissioners in 1891 to the parish of Arbroath; while the  larger, situated at Inverpeffer and comprising 1108  acres, was transferred to the parish of Panbride. Part  of the parish of Arbroath was at the same time transferred to the parish of St Vigeans. (See Arbroath.)  The parish, containing the greater part of the town of  Arbroath, is bounded N by Inverkeilor, E and SE by  the North Sea, S by Arbroath and Arbirlot, and W  and NW by Carmyllie. It measures 7½ miles from E  to W; and varies in breadth between I¼ and 4½ miles.  Up till about 1560 it included the entire town of  Arbroath with its abbey, and was sometimes called  Aberbrothock. From the boundary with Inverkeilor  to within a mile of Arbroath, the coast of the parish is  a range of almost perpendicular cliffs, with a maximum  height of 157 feet. In nearly their whole extent their  base is covered with water at full tide, so that for the  most part access to the large and interesting caves,  crevices, and arches which are numerous along the  seaward face, is possible only at low water or by boat.  The chief of these spacious and romantic caverns are  the Gaylet Pot, the Mason’s Cave, and the Maiden Castle Cave. The cliffs figure in Sir Waltter Scott's  Antiquary as the scene of the dangerous adventure of  Sir Arthur and Miss Wardour. The surface of the  parish is mainly occupied by three different declivities  or ridges; while the streamlet Brothock, flowing SSE,  divides it into two tolerably equal parts. The chief  eminences are Dichmont Law (323 feet), about miles from the coast, and Cairn Conan (597), in the W, 7½ miles from the sea, and commanding a beautiful and  extensive view. Eruptive rock occurs in St Vigeans,  but is not prominent; Old Red Sandstone is found  tolerably general, and is extensively quarried at Whittingness, and has been a good deal used lor building in  Arbroath; and a softer variety, containing vegetable  fossils, is quarried at Drumyellow and Brax. Diluvial  ridges, consisting of boulders, gravel, sand, and clay  strata, several of them 1 mile long, lie along the sides  of the Brothock, and have a maximum altitude of about  40 feet. Several rocky heights of sandstone also occur  near the lower course of the Brothock. One of them  affords a convenient and conspicuous site for the parish  church; and another very similar in appearance, 180  yards distant, is famous for an echo of four syllables.  The soil varies in character throughout the parish, but  is prevailingly fertile. In 1744, with the exception of  garden ground, not more than 40 acres were enclosed  within the parish. Now rather more than 800 acres  are under wood, and nearly all the remainder is in  tillage. The industries of the parish include, besides  agriculture, a part of the textile industry in Arbroath,  with fishing at Auchmithik, and spinning in an extensive establishment at Inch mill, originally erected in  1808. The roads of the parish are good; and a section  of the Arbroath and Forfar branch of the Caledonian  railway crosses it, as does also the Arbroath and Montrose section of the North British railway. Besides  the village of the same name, St Vigeans parish includes  the villages of Auchmithie, Colliston, Marywell, and  Gowanbank, and part of the post-town of Arbroath. The chief modern mansions are Letham, Seaton, Abbethune, Springfield, Parkhill, Newton, Millbank, Woodlands, Almeriecloss, Beechwood, and Hospitalfield. The old mansion of Colliston is said to have been built by  Cardinal Beaton for his son-in-law.

St Vigeans itself is in the presbytery of Arbroath  and the synod of Angus and Mearns; the living is  worth £303. The parish is divided ecclesiastically  into St Vigeans proper and the quoad sacra parishes  of Auchmithie, Colliston, and Inverbrothock, with  parts of the quoad sacra parishes of St Margaret’s,  Ladyloan, and Abbey Arbroath. The parish church  was originally erected not later than the beginning of  the 11th century, but it was considerably enlarged  before 1242, and repaired in 1485. Alterations or  repairs took place during the 18th century, and some  enlargements in 1822 and 1827, in course of which the  church lost much of its original Saxon or Norman  character. In 1872, however, it was restored at a cost  of fully £3000, to a plain uniform 15th century Gothic  style; and it now comprises a nave, aisles, pentagonal  chancel, with a square tower and spire, while the  interior is adorned with a carved oaken pulpit, an  octagonal baptismal font, and beautiful stained-glass  windows. It contains about 900 sittings. Both the  ancient church and the surrounding burying-ground  were noted for sculptured sepulchral stones; and several  ancient crosses and finely executed mouldings have been  found. A chapel, dedicated to St Ninian, formerly  stood near the sea; and the adjacent St Ninian’s Well  was believed to possess great curative powers. Two  public schools, Colliston and St Vigeans, with respective accommodation for 170 and 188 children, have an  average attendance of about 85 and 95, and government  grants amounting to nearly £80 and £85. Valuation (1885) £20,970, (1893) £17,384, plus £3163 for railway.

You can see pictures of St Vigeans which are provided by:

"Lying on the sea coast to the East and North of the town of Aberbrothock, and comprehending a great part of the suburbs of that town. It is of considerable extent, being 7 miles long, and from 3 to 4 broad, containing 9385 acres; all of which, except about 700 or 800 acres of improvable muir and plantation, are arable. The surface is pretty level, rising on both sides, from the small river Brothock, whihc divides it into two parts. The soil is exceedingly various; but upon the whole fertile, and well cultivated. The coast for about a mile East from Aberbrothock, is flat and sandy: at the end of this plain it rises abruptly .... The parish church is old and romantically situated on the top of a small conical mount, near the Brothock .... The chief employment of the inhabitants is the manufacture of cloth for the Abroath market."

You can see the administrative areas in which St Vigeans has been placed at times in the past. Select one to see a link to a map of that particular area.