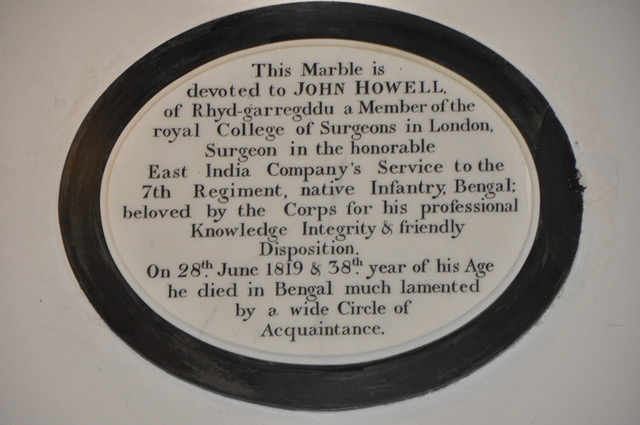 On 30th June 2019 a memorial service was held at St Lucia’s, Abernant to remember the life of this young Welsh boy from Abernant, Carmarthenshire.

John Howell (his father Thomas Howell  tells us in a letter written in 1785 to his brother in law)  that John his youngest son was born at 4pm on the afternoon of 5th November 1781 at the farm Rhydd y garreg duu.

John’s eldest brother was Howell Howell, five years older, and born in 1776 in Abernant.
Howell Howell farmed nearby at Cwmgest until his death in 1840. It was this older brother Howell Howell who worded and arranged for the above memorial in St. Lucia’s church to be erected in his brother’s memory.

John, as the youngest brother with no expected inheritance, had to make another way in life.
He seems to have been supported financially and most probably to have been educated by his his ‘Anwyl Ewythr’ the Rev. Thomas Thomas who was a curate at Isham and Farndon in Leicestershire.

At the turn of the century in 1800 John Howell is 19 years old and he is already a Member of the Royal College of Surgeons.

Four years later, in 1804 and  aged 23 he achieves his MD and becomes a surgeon in London.

However, luck prevails and a few months later in 1805 John Howell is appointed Assistant Surgeon for Bengal, India in the East India Company.

John Howell sailed to Calcutta on the ship Britannia as 3rd mate  arriving in Bengal in the same year December 1805 to take up his appointment.

1814 John Howell  took a  furlough to travel home as a result of certified sickness.

16th June 1814 John Howell surgeon left Calcutta on board the ship Matilda to return home to Portsmouth.There were two employees of the E.I.C. coming home  on the Calcutta Mr John Howell and Captain S. Lutwige of the 11th native infantry who was also on sick leave.

16th December 1814 In a letter John Howell on arrival from India to Portsmouth is writing to his uncle the Rev. Thomas Thomas at Farndon describing a very painful voyage at sea.
John Howell  is clearly not well.

8th June 1815  Rev Thomas Thomas writes to his niece Phoebe’s husband the Rev.Thomas Skeel at Newhouse, Pembrokeshire asking him to come and collect john Howell from a ‘Mr Talbot’s madhouse’ in Bethnal Green.

’the fall from his horse in Asia probably is the primary cause of his derangement having affected his spine and brain… his removal to his native air is possibly a salutary means of recovery.’
‘There is more to be said about John Howell’s affairs than I can explain on paper. Mr Talbot is to have £1.11.6 pence per week besides some extra expenses each week.’
‘Favour me with a reply as soon as possible
In much trouble of mind’

In that summer of 1815 John Howell is rescued from Bethnal Green, by his cousin’s husband the  Rev Thomas Skeel and taken to Millbrook House, Carmarthen to recover his sanity.

In 1817 John Howell returned to duty as Assistant Surgeon with the East India Company in Bengal with the 7th regiment of native infantry.

In 1818 John Howell was nominated a Surgeon by Sir H. Inglis. Bart.

John Howell died on 28th June 1819 aged 38 at Kissengunge, Maharashtra, India. (See his Will below)
The memorial was requested by him to be placed in St Lucia’s, Abernant.

This is the last will and testament of me John Howell Assistant Surgeon in the honourable East India Company Service and upon their Bengal establishment as follows.

I hereby do appoint the Reverend Thomas Thomas of Kibworth Harcourt in the county of Leicester, George Sargent -Captain in the 7th regiment of Bengal native Infantry and **David Lewis Assistant surgeon on the Bengal establishment to be executors of this my last will and testament…….

A codicil added to the will left  £300 to his uncle Rev. Thomas Thomas