Details about the census records, and indexes for Barton on Irwell.

The Register Office covering the Barton on Irwell area is Salford.

You can see pictures of Barton on Irwell which are provided by:

"PATRICROFT, a hamlet in the parish of Eccles, hundred of Salford, county Lancaster, 4 miles W. of Manchester. It is a station on the Manchester section of the London and North-Western railway. One of the collieries in this neighbourhood is reckoned the deepest in the county."

"IRLAM, a hamlet in the parish of Eccles, county Lancaster, 5 miles S.W. of Leigh. It is situated on Chat Moss, near the junction of the rivers Irwell and Mersey."

"CADISHEAD, a hamlet in the township of Barton-on-Irwell, and parish of Eccles, hundred of Salford, in the county palatine of Lancaster, 4 miles to the W. of Manchester."

"BARTON-ON-IRWELL, a township in the parish of Eccles, and hundred of Salford, in the county palatine of Lancashire, 7 miles to the W. of Manchester, its post town. At Barton Moss is a station on the Liverpool and Manchester railway. The Bridgwater canal is here carried across the Irwell on an aqueduct of three arches, the first of the kind constructed in England. It is of stone, and 40 feet in height. Here are extensive manufactories of calico and nankeen, and several collieries. The living is a perpetual curacy in the diocese of Manchester, of the value of £150, in the patronage of the bishop, the Vicar of Eccles, and others. There are two Dissenting chapels."

In 1835 Barton on Irwell was a township in the parish of Eccles.

You can see the administrative areas in which Barton on Irwell has been placed at times in the past. Select one to see a link to a map of that particular area. 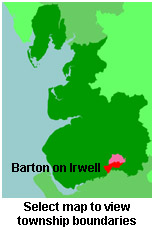 View maps of Barton on Irwell and places within its boundaries.

The Workhouse site has an interesting description of Barton workhouse.