Details about the census records, and indexes for Bootle.

You can see pictures of Bootle which are provided by:

"BOOTLE-CUM-LINACRE, a township in the parish of Walton-on-the-Hill, hundred of West Derby, in the county palatine of Lancaster, 3 miles to N. of Liverpool. It is a station on the Southport branch of the Lancashire and Yorkshire railway. The village is pleasantly situated on the sea-coast, and was till recently much frequented as a watering-place. The Liverpool North Docks now extend into Bootle, and occupy a great portion of the shore formerly frequented by bathers. Seaforth, Waterloo, and Crosby, higher up the coast, are consequently much benefited by the influx of visitors. Linacre is a hamlet included in this township The living is a perpetual curacy in the diocese of Chester, of the value of £164, in the patronage of W. S. Miller, Esq. The church is dedicated to St. Mary."

"LINACRE, a township in the parish of Walton-on-the-Hill, hundred of West Derby, county Lancaster, 4 miles N. W. of Liverpool."

In 1835 Bootle was a township in the parish of Walton on the Hill.

You can see the administrative areas in which Bootle has been placed at times in the past. Select one to see a link to a map of that particular area. 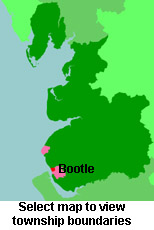 View maps of Bootle and places within its boundaries.