"HINDLEY, a town, a township, two chapelries, and a sub-district in Wigan parish and district, Lancashire. The town stands adjacent to the Wigan and Bolton railway, 2½ miles ESE of Wigan; is a seat of cotton manufacture; and has a post office under Wigan, a railway. station with telegraph, two churches, five Independent chapels, a Roman Catholic chapel, three national schools, an endowed grammar school, charities £85, and a fair on the first Thursday of Aug. There are extensive cotton mills, and a large and prosperous co-operative store. All Saints church was built in 1766, on the site of a previous edifice; is a plain brick structure; consists of nave, aisles, and chancel, with a belfry; and contains a font and mural monuments. St. Peter's church was built in 1864; is a handsome edifice in the pointed style; and consists of nave, aisles, and chancel, with porches and a lofty tower and spire. The township is returned statistically as conterminate with the town; but includes the hamlets of Platt-Green or Platt-Bridge and Hindley Green, which have stations on the Wigan and Tyldesley railway 1½ and 3¾ miles from Wigan, and the hamlet of Hindley Common, which is 4 miles from Wigan, and has a post office under Wigan. Acres of the township, 2,522. Real property, £32,550; of which £14,130 are in mines. Pop. in 1851, 7,023; in 1861, 8,477. Houses, 1,630. The property is subdivided. The chief landowners are the Earl of Ellesmere, Lord Kingsdown, Sir H. de Trafford, Messrs. Hargreaves, and J. Walmsley, Esq. Coal is extensively worked. A "burning well" is here, emitting inflammable gas, produced by the decomposition of mineral substances in the substrata. The chapelries are All Saints and St. Peter; the former parochial, the latter of recent constitution, and both p. curacies in the diocese of Chester. Value of A. S., £300;* Patron, the Rector of Wigan. Value and Patron of St. P., not reported. The sub-district contains also the townships of Ince-in-Mackerfield and Abram. Acres, 6,801. Pop. in 1851, 11,661; in 1861, 17,654. Houses, 3,336."

Details about the census records, and indexes for Hindley.

The Register Office covering the Hindley area is Wigan and Leigh.

You can see pictures of Hindley which are provided by:

"HINDLEY is a chapelry in the parish of Wigan, from which town it is distant three miles, in which is a rare phenomenon, called by the inhabitants the 'Burning Well,' which attracts many visitors. This well is similar to the one at Petoa Mala, near Fierenzota, in Italy, with this difference, that the flame of the Italian spring is perpetual, except in heavy rains, and consists of sulphuric gas, while the inflammable principle of the one at Hindley is the decomposition of water acting upon ores and sulphate of iron. The number of inhabitants in this chapelry, in 1821, was 3,757."

"HINDLEY, a township and chapelry in the parish of Wigan, hundred of West Derby, county Lancaster, 3 miles S.E. of Wigan, its post town, 7 from Bolton, and 17¾ from Manchester. It is a station on the Lancashire and Yorkshire railway. The village, which is very considerable, is situated on the old road from Wigan to Bolton. There are some extensive collieries and cotton-mills. In the vicinity is a burning well of cold water, produced by the decomposition of water acting upon metallic ores and sulphate of iron, &c. It is similar to that at Petoa Mila, near Fierenzota, in Italy, except that the flame of the Italian spring is perpetual in the absence of heavy rain, and consists of sulphuric gas. The living is a perpetual curacy in the diocese of Chester, value £250. The church, which was rebuilt in 1766, is dedicated to All Saints. It is a brick structure, with a tower containing one bell. In the interior of the church are brasses and several mural monuments. The register is ancient. The parochial charities produce about £85, of which £10 go to the endowed grammar school founded by Mrs. Abram. There is also a National school for both sexes, and three infant schools. Hindley Hall is the principal residence. An annual fair is held on the first Thursday in August."

"PLATT BRIDGE, in the parish of Wigan, it is a station on the Manchester and Wigan section of the London and North Western railway, county Lancaster, about 1½ mile from Wigan."

In 1835 Hindley was a township in the parish of Wigan.

You can see the administrative areas in which Hindley has been placed at times in the past. Select one to see a link to a map of that particular area. 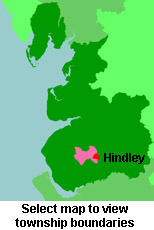 View maps of Hindley and places within its boundaries.