"HOPWOOD, a township in Middleton parish, Lancashire; on the Manchester and Leeds railway, and the Rochdale canal, 1 mile N of Middleton. It includes the villages of Birch and Gooden. Acres, 2,043. Real property, £10,822; of which £2,200 are in mines. Pop. in 1851, 1,575; in 1861, 2,281. Houses, 450. The increase of pop. was caused by the erection of cotton mills. Hopwood Hall is a mansion of the 14th century, situated in a well wooded park; belonged, at its origin, to the Hopwoods; passed, early in the 18th century, to Edward Gregge, Esq.; and belongs now to Captain E. J. Gregge Hopwood. Many cotton mills, and an extensive iron foundry are at Gooden; and a national school is at Birch."

Details about the census records, and indexes for Hopwood.

The Register Office covering the Hopwood area is Rochdale.

You can see pictures of Hopwood which are provided by:

"HOPWOOD, a township in the parish of Middleton, hundred of Salford, county Lancaster, 4 miles S.E. of Bury, and 1 mile from Middleton. It is situated on the Rochdale canal. The township produces a good supply of excellent coal. Hopwood Hall, an ancient mansion, situated in a well wooded park, is the principal residence."

"BIRCH, a chapelry in the parish of Middleton, hundred of Salford, in the county palatine of Lancaster, not far from Middleton. The living is a perpetual curacy in the diocese of Manchester, value £150, in the gift of the Rector of Middleton. The church, erected in 1828, is dedicated to St. Mary."

In 1835 Hopwood was a township in the parish of Middleton.

You can see the administrative areas in which Hopwood has been placed at times in the past. Select one to see a link to a map of that particular area.

A description of Hopwood in the 19th century. 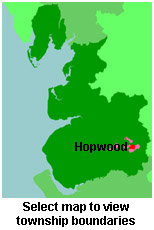 View maps of Hopwood and places within its boundaries.