HORWICH, a town, a parochial chapelry, and a subdistrict in Bolton district, Lancashire. The town stands 1 mile N of a station on the Bolton and Preston railway, and 5 WNW of Bolton. The railway station serves for it and for Blackrod, and has a telegraph. The town occupies the site of a Roman settlement; was a seat of cotton manufacture so early as the time of Henry VIII.; carries on now cotton spinning, bleaching, and dyeing; also conducts trade in connection with stone quarries, fire brick, tile, and terracotta works in the chapelry, and with collieries there and in the neighbourhood; and has a post office? under Bolton, a church, three dissenting chapels, a national school, and charities £392. The church was rebuilt in 1831, at a cost of £6, 000; is in the pointed style; comprises nave and two aisles, with lofty tower; and contains a monument, by Westmacott, to Joseph Ridgway, Esq. Two of the dissenting chapels are for Independents; and one of these is a large and handsome edifice of 1855. The national school is a spacious structure of 1832. The chapelry contains also the village of Wilderswood, and is in the parish of Dean. Acres, 3, 230. Real property, £15, 880; of which £170 are in mines, and £82 in quarries. Pop., 3, 471. Houses, 682. The Stoner family and the Rev. Henry Wright are the chief landowners. The reservoir of the Liverpool water works, a large sheet of water, is in the W. The living is a vicarage in the diocese of Manchester. Value, £334. * Patron, the Vicar of Dean. The sub-district contains also a township of Bolton-le-Moors. Acres, 4, 656. Pop., 4, 051. Houses, 803.

Details about the census records, and indexes for Horwich.

The Register Office covering the Horwich area is Bolton.

You can see pictures of Horwich which are provided by:

"HORWICH, a chapelry in the parish of Deane, hundred of Salford, county Lancaster, 5 miles N.W. of Bolton, its post town, 5 N.E. of Chorley, and 15 N.W. of Manchester. It is situated on the high road from Bolton to Chorley, and 1 mile from its station on the Lancashire and Yorkshire railway. It was formerly a Roman station. A large portion of the inhabitants are employed in cotton printing and bleaching, which latter is carried on to a considerable extent. The coal-pits are very productive, also some extensive stone-quarries. The reservoir of the Liverpool waterworks, which is of great extent, adjoins the W. end of this district. The soil is various. The living is a perpetual curacy in the diocese of Manchester, value £334. The church, dedicated to the Holy Trinity, was erected in 1831, at an expense of £5,848 15s. It is a stone structure, with a lofty tower containing six bells. The interior of the church contains a stained window, also a monument to Joseph Ridgway, Esq. The charities include a bequest of £142 per annum for church purposes by the late Joseph Ridgway, with a further endowment of £100 to the poor, the same amount to the minister, and £40 to the church school, at the decease of his widow. There is a National school. The Independents have two chapels, and the Wesleyans one."

In 1835 Horwich was a township in the parish of Deane.

You can see the administrative areas in which Horwich has been placed at times in the past. Select one to see a link to a map of that particular area. 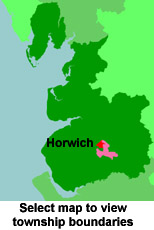 View maps of Horwich and places within its boundaries.