HUYTON, a village, a township, a parish, and a subdistrict, in Prescot district, Lancashire. The village stands near the Manchester and Liverpool railway, 5½ miles E of Liverpool; contains, with its neighbourhood, many good houses; and has a station on the railway, and a post office under Liverpool. The township comprises 1,630 acres. Real property, £10,593; of which £369 are in quarries. Pop. m 1851, 1,295; in 1861, 1,612. Houses, 283. The parish contains also the townships of Knowsley, Roby, and Tarbock. Acres, 9,807. Real property, £32,942; of which £1,367 are in mines, and £699 in quarries. Pop. in 1861, 4,054. Houses, 724. Much of the land, with Knowsley Hall, belongs to the Earl of Derby. Tarbock is the property of the Earl of Sefton. The Hazels is the seat of Sir Thomas B. Berch, Bart. Stone is quarried; and about 200 acres are peat moss. The living is a vicarage in the diocese of Chester value, £690.* Patron, the Earl of Derby. The church is ancient; was recently restored; and has two good memorial windows, and an ancient carved oak screen. The p. curacies of Knowsley and Roby are separate benefices. There are chapels for Independents and Roman Catholics, national schools for Huyton and Knowsley, and charities £40. The Independent chapel is a recent and handsome edifice, in the pointed style. The subdistrict contains also Thingwall hamlet. Pop., 4,094. Houses, 732.

Details about the census records, and indexes for Huyton with Roby.

The Register Office covering the Huyton area is Knowsley.

You can see pictures of Huyton with Roby which are provided by:

"HUYTON, a parish in the hundred of West Derby, county Lancaster, 6 miles E. of Liverpool. It is a station on the Manchester and Liverpool section of the London and North-Western railway. The parish contains the townships of Knowsley, Roby, and Tarbock. The township of Knowsley abounds with coal and stone. The land is chiefly arable, with a large extent of woodland and park grounds. Latham House, in this parish, sustained a siege during the Civil War. The living is a vicarage in the diocese of Chester, value £690. The church, dedicated to St. Michael, is an ancient edifice. There are also two district churches at Knowsley and Roby-the livings of both are perpetual curacies, value £300 and £200. The charities produce £40 per annum, of which £10 goes to the support of a school. There is a Roman Catholic chapel and a National school. The principal residence is Knowsley Park, a seat of the earls of Derby."

"ROBY, a township in the parish of Huyton, hundred of West Derby, county Lancaster, 2 miles S.W. of Prescot, and 1 mile from Huyton. It is a station on the Liverpool and Manchester railway. The village is irregularly built, and is chiefly agricultural. The living is a perpetual curacy in the diocese of Chester, value £200. The church is dedicated to St. Bartholomew. Roby Hall, which is the principal residence, is erected on the site of a more ancient one."

In 1835 the parish of Huyton contained the townships of Huyton with Roby, Croxteth Park, Knowsley and Tarbock.

You can see the administrative areas in which Huyton with Roby has been placed at times in the past. Select one to see a link to a map of that particular area.

Some information about the history of Huyton and that of Roby. 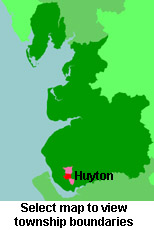 View maps of Huyton and places within its boundaries.