There are at least 2 Aughtons in Lancashire. This is the one near Ormskirk and there is another near Halton, Lancaster.

AUGHTON, a parish and a subdistrict in the district of Ormskirk, Lancashire. The parish lies on a branch of the river Alt, and on the Liverpool and Preston railway, at Town-Green station, near the Liverpool and Leeds canal, 2½ miles SSW of Ormskirk. It has a post office under Ormskirk. Acres, 4,462. Real property, £13,804. Pop., 1,870. Houses, 360. The property is much sub-divided. Aughton Hall is a chief residence. The living is a rectory in the diocese of Chester. Value, £830. Patron, J. P. Tempest, Esq. The church was rebuilt in 1867, at a cost of £6,000. There is a Roman Catholic chapel. The subdistrict includes also two chapelries. Acres, 8,530. Pop., 3,862. Houses, 708.

Details about the census records, and indexes for Aughton.

The Register Office covering the Aughton area is West Lancashire

You can see pictures of Aughton which are provided by:

"AUGHTON, a parish in the hundred of West Derby, in the county palatine of Lancaster, 2 miles to the S.W. of Ormskirk, its post town. The Leeds and Liverpool canal passes near it on the W., and a little further off is the river Alt. The living is a rectory in the diocese of Chester, of the value of £830, in the patronage of J. P. Tempest, Esq. The church is dedicated to St. Michael. Aughton Hall is the principal residence."

You can see the administrative areas in which Aughton has been placed at times in the past. Select one to see a link to a map of that particular area. 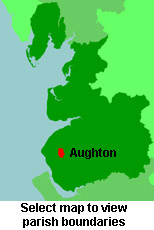 View maps of Aughton and places within its boundaries.