This is the Middleton near Manchester. There is also a Middleton township near Lancaster.

"MIDDLETON, a town, a township, a sub-district, and a parish, in Lancashire. The town stands in a fertile vale, on the river Irk, at the terminus of a short branch of the Lancashire and Yorkshire railway, near the Rochdale canal, 6 miles N by E of Manchester; took its name from being situated in the centre of several circumjacent towns; was only a village of 20 houses in 1770; has risen, since 1780, into a populous seat of manufacture; is now an important place, nearly a mile in length, well supplied with water, thoroughly drained, and under the management of a local improvement board by act of 1861; is so conjoined with Tonge in both proximity and trade as practically to include or absorb that town; carries on industry in extensive silk factories, in numerous large cotton factories, in calico-printing, bleaching, and dyeing establishments, in iron foundries, and in machinemaking establishments; publishes a weekly newspaper; is a seat of petty sessions; and has a post office under Manchester, a railway station with telegraph, several good inns, a police station, a market-house, public baths, two churches, five dissenting chapels, a Roman Catholic chape1, a grammar school, two national and infant schools, a free library, a church reading-room and library, an agricultural society, and a floral and horticultural society."
More ...

Details about the census records, and indexes for Middleton.

The Register Offices covering the Middleton area are Rochdale and Oldham.

You can see pictures of Middleton which are provided by:

You can see the administrative areas in which Middleton has been placed at times in the past. Select one to see a link to a map of that particular area. 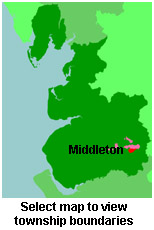 View maps of Middleton and places within its boundaries.