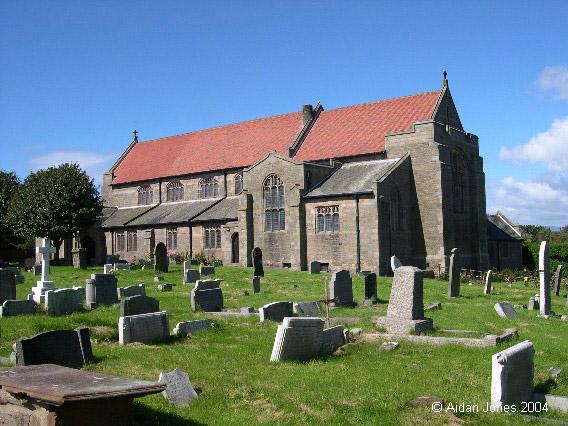 The church has/had a graveyard. The monumental incriptions have been separately recorded and published in two websites. Walney Monumental Inscriptions and Walney Graves.

It was founded in 1577. Walney was originally a chapelry of Dalton, probably founded in the 16th century and achieving parish church status in the 19th century. The present church is at least the third to be built within the same churchyard, reflecting the steady growth in the population of Walney. Its foundation stone was laid in 1907, but the building was not completed until 1930. (The previous church was in the same yard, but slightly to the south. It was dismantled a few years after the completion of the present building. However its four corner stones, left as markers, can still be seen.)

Biggar and North Scale are the only hamlets on the island, and intermediate between the two is the church of St. Mary. The date of its erection is uncertain, but is was in existence as early as 1577, and was probably built before the downfall of Furness Abbey. In the inquisition of 1650 it is styled Wana Chapel, and the whole chapelry, embracing the island of Wana contained only sixty families.   The inhabitants do not appear at that time to have been in a very flourishing condition, or else they were supinely indifferent to the creature comforts of their minister, for the whole sum contributed towards his maintenance was 6s. 6d. per year. They also prayed to be made parochial, but their request was not granted, and the living remains a perpetual curacy, in the gift of the vicar of Dalton.   The incumbency, worth £180, is now held by the Rev. H. M. Burgess, B.A., Dublin. The area of the ecclesiastical district is 12,800 acres.

The present church is a small but neat structure, erected upon the site of the old chapel. In the burial ground lie the remains of Mr. Close, an antiquarian of repute, who edited the last edition of West's Antiquities of Furness.   Near the church is the school, erected by Mrs. Michaelson, of Barrow Island, to the memory of her husband. It is now under the management of the School Board.

from Mannex's Directory of Furness & Cartmel, 1882